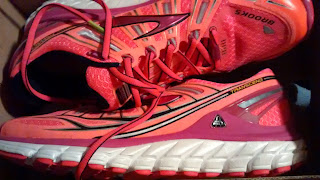 November 1st is known as World Vegan Day and November is also World Vegan Month, did you know? I certainly didn't...and wow, since 1994!

Not that I'm vegan. I'm not. However, I just bought a new pair of runners that are! Can you believe it?! Who would have known they make vegan running shoes? I've never heard of such a thing!

In case you're interested, they're made by Brooks, a company in Seattle with offices worldwide (http://www.brooksrunning.com) that specializes in running shoes. According to the salesclerk who helped me, they are #2 in the world.

This is what I was informed regarding the 'vegan' part of the shoe:

In many running shoes, the glue used to attach the upper to the outsole contains animal products (as does most industrial glue). Brooks uses a different material for this attachment. In addition to this, they have an additive called BioMoGo that is put into all of their outsoles which breaks down 50 times faster in a landfill than traditional outsole materials. 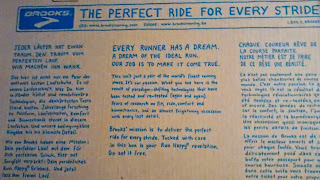 Inside the lid of shoe box

I needed a ‘solid’ pair of shoes as I have narrow feet, high arches and major problems finding proper-sized footwear. Over the recent years, I’ve encountered – my third time – a painful condition called plantar fasciitis (http://en.wikipedia.org/wiki/Plantar_fasciitis) which I’ve been struggling with for about two-and-a-half months now…silly me!)

Apparently, it's a common condition for runners though I'm not one. Supposedly weight and age are factors which is applicable to me; however, I intuitively sense that it is improper footwear, i.e., ill-fitting shoes over the years and I walk a lot.

I was advised running shoes with good support by my podiatrist and with shoelaces as well by my M.D. (medical doctor). (What can I say except that I will miss my slip-on shoes, especially as I am usually in a hurry when I go to work in the morning.)

The four-out-of five cushioned shoes were not too bad, though I felt I needed more support and luckily the 5/5 fully cushioned shoe had better comfort and support. Luckily the Transcend brand – I hope they help to transcend my pain! – happened to be on sale as the original price was $190: wow! Though I would have preferred it in blue, I didn’t care that it was bright pink toned as all I care at this point is comfort and fit. 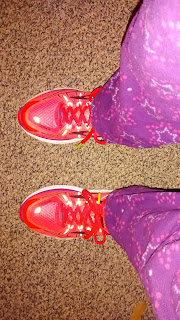 Anyway, getting off track here...what does it mean to be vegan? A true vegan is one who avoids any form of animal products, whether in the form of food or otherwise. There are health benefits as well as benefits to the planet as well, not to mention animals of course! Read the following if you are interested in learning more: http://www.national-awareness-days.com/world-vegan-day.html).

I have to laugh here - a little aside - as I just had a memory while writing this. Many years ago, in my 20's I actually joined the Toronto Vegetarian Society in order to meet - oh my, that sounds like meat! - this good-looking man who was part of the group. Silly me! Anyway, it was fun to converse with him and others at the time.

And ironic too that I am currently eating antibiotic and hormone-free meat as part of a stew. I usually buy organic meat though eat red meat (organic and well cooked) once or twice a week (usually leftover). And I do this because I think my body requires it from time to time. I say this because…

…I was living in a vegetarian household - a roommate who was adamant about meat not being cooked in the home, my iron plummetted and I had on one occasion three B-12 shots...and they didn't do anything for me.

I would love/prefer to be vegetarian at least - I love animals - and thought I would become one one day, but I'm not there, not yet anyway.

Tell me, are you vegan or vegetarian? Was it by choice or what made you decide? Are you able to maintain adequate iron levels (without supplements)? I would love your feedback on this. If it matters, my blood type is AB (about 3% of the population).

This post is linked to NaBloPoMo as well as Ultra Blog Challenge and WriteTribeBloggers.
Posted by elly stornebrink at 11:00 PM