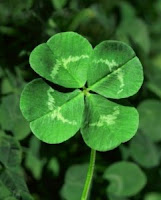 “It’s your lucky day!” the bus driver exclaimed several times two weeks ago on a Monday morning as I had waited too long and missed one “not in service” bus due to full capacity. I didn’t know till the announcement the reason was because of an earlier multi-vehicle and semi-trailer accident on the Second Narrows bridge in North Vancouver.

“Hmmm,” I thought when the announcement was made, “certainly a matter of perspective. Yes, better to be late and alive than the alternative.”

Yesterday I had fallen and injured the heels of both my hands, my right knee, and right elbow (the latter the worst). I didn't feel so lucky, at least then (albeit an 'angel' helped me. See my previous posting). But according to the next day’s incident, I was indeed! All just a matter of perspective.

So, what do you consider luck?

Earlier today, I tripped and fell on a bumpy piece of sidewalk on upper Commercial Drive as I was running hard and fast to catch a connecting bus.

Silly me! Is it really worth - now spoken in hindsight! - risking one’s life or limbs for a few minutes of potential gain?

It was only about 30 seconds on this desolate road that a man’s voice called out: "Are you okay?" I wanted to speak but couldn’t due to shock and/or pain. All I knew was that I was hurting, quite a bit, from the fall with the heels of my hands being scraped, along with my right knee and right elbow.

After asking him if he had any Kleenex and then remembering I had some, I told him where to look for it in my knapsack. Then I covered my hands and elbow as best I could with it aware of possible germs and infection.

He asked if I could get up. I couldn’t. Though he tried lifting me(!) and then suggested I remove my backpack, I turned myself around towards the grass and lifted myself awkwardly up.

He proceeded to ask where I was headed to and if he could take me there. I suggested the medical walk-in clinic a number of blocks further down Commercial Drive. That was the priority!

As he started driving, I thought to ask his name – at least wanted to know that - and where he was heading to. As soon as he answered "Rob", I knew that I wanted to write about this experience, his kind gesture. Good deed for the day as I often say!

Due to a car-free afternoon festival, a portion of the Drive was closed. Luckily Rob knew its whereabouts as he stopped the car at the nearest blocked intersection and helped me get to the clinic.

I was grateful to be the next person to be seen and my injuries taken care of and wrapped within a few minutes of the incident.

After all this, all I'm left with is his first name, the memory of his face (dark hair and glasses primarily) and car (beat-up silver or grey, pick-up type vehicle), and his occupation or craft as an artist. And though I may forget his face or his name in time – or not! – I’ll always remember this act of service, from a kind stranger.

I’m truly grateful for and appreciative of kind strangers and good deeds.

What are you grateful for…today? 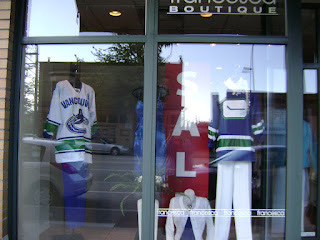 I’m stupefied by the fact that the Vancouver police didn’t seem to fathom a possible riot a year ago, when members of the general public – ordinary, everyday people like myself (and I’m not even a hockey fan) – highly expected it. And not only if we had lost, but also if we had won!

Interesting too, that out of curiosity while surfing the net I discover it was the exact same teams that played and lost the same game (number 7) back in 1994 and last year. And the police did not expect a riot with that info? Unbelievable!

Regardless, it’s certainly a shame as the riot seems to have tarnished Vancouver’s reputation as one of the best cities to live in the world. No wonder why Vancouver became a “no-fun city” a number of years ago: the ’94 riot probably contributed to this.

I recall riding the skytrain into Vancouver from Burnaby with my boyfriend at the time to watch a movie. After hearing comments about possible rioting/looting from several riders (which quite shocked me), I wanted to immediately return to whence we came, though my boyfriend didn’t.

Emerging from the movie theatre at the end of the show, I witnessed a sight that looked and sounded what could have been a war zone. Ironically, I have felt eerily peaceful and calm at two close-to-death experiences, but a mob mentality is another story! With its extremely menacing and dangerous nature, I was scared for both of us as we traversed downtown Vancouver hoping to make it home unscathed.

What is the lesson or are the lessons to be learned to prevent future riots? (By the way, Vancouver Canuck fans: jerseys on sale!)

I’ll let you answer that as I said hockey isn’t for me, never was, and never will be. I have better and more important things to do with my time than watch a bunch of men play and get paid millions for what’s become a violent sport, seemingly both on and off ice. (I’ll let you use your imagination on that last comment.)

As I type this posting, I still feel some of the anxiety churning in my stomach which quite amazes me. Unfortunately, both riots, particularly the one last year – I thought we would learn from the first one – has left a bitter taste in my mouth.

So why am I writing about this then you might wonder? Good question! Partly to expose what a number of people already foresaw with the hope that somehow this can prevent another such occurrence, and also to hopefully learn the lessons involved for the same reason.

Let us be peace and live in peace. Is an award, a trophy, a cup (Stanley Cup) worth fighting for? Maybe in terms of fighting for it as a goal, but not in the literal sense please. Spare me and spare Vancouver. We don’t need nor want another riot.

How do you demonstrate peace in your being and/or actions?

Posted by elly stornebrink at 2:17 PM No comments: