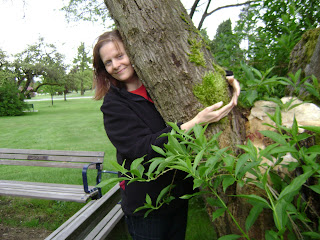 Happy 10th anniversary to me today, living on the beautiful North Shore, North of Vancouver, where I was guided to move to from Kitsilano (AKA Kits) in Vancouver.

I moved from Kits with its trendy neighbourhoods, homes, eateries, store-fronts, and beaches. Never thought I would move from there nor expected to, at least in a long time, as I didn't want to. After all, since I had moved to the east side of Vancouver years prior, I yearned and made it a goal to move to Kitsilano, finally ending up there.

The day after my tiring move, I was awakened and startled - I was looking forward to sleeping in! - to quite a number of intermittent sirens of emergency vehicles. Though I had moved about a block away from Lions Gate Hospital, I wondered what the commotion was all about. When I finally rolled out from my lazy bed, I discovered the noise nuisance: Canada Day parade on Lonsdale!

So Happy Anniversary to me and Happy Birthday to Canada!

I'm grateful to be Canadian ... 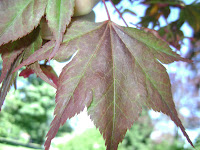 though I'm proud to be European-born. ;)

Do You See What I See? 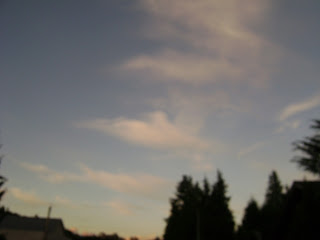 I often see things people miss or don’t notice, though not dead people like some people (I know) do! Sometimes this is claircognizant and other times observational, the latter for example when I look one way and see something, and no one is looking or has looked that way. There...yes there...over there!

Another thing I notice and have discovered that some people do and some don’t see this are things that resemble sparkles, like fireflies? I imagine that is what they look like. Perhaps better described though as twinkling Christmas tree lights that flash on and off intermittently and quickly. I experience this as a bunch of small (even tiny?) brilliant flashes of light. It’s like what I see watching the top of ocean waves on a bright summer day. Do you see that too?

I was aware of these lights about five years ago give or take. I just happened to experience this phenomenon one day and thought it was the intense summer sunshine on the pavement as that is where I saw them initially. Since then, however, I have seen this in the air outside (quite often) as well as occasionally on the pages of a book I’m reading, and on (somewhat) cloudy days too!

I’ve been told they’re fairies, though who knows. If fairies are real as some people deem, then that would certainly open up a "cow" as we coin "can of worms" (or C.O.W.) at my workplace! If that exists, then what else does? Do you really wish to know? Are you ready to find out?

And what other possibilities are limited by our vision, i.e., can we see with limited vision? There is certainly more to the world than meets the eye!

A different spectacle is when, just last week, I felt this strong impulse to snap a photo of the following: 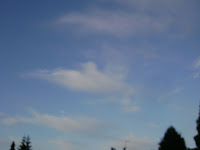 What do you see? Do you see what I see? Is it a bird? A plane? Superman? Just kidding!

To me, there was no mistaking the striking image I saw in the shape of the cloud. I saw it and recognized it immediately as a bird, a dove specifically, from the view of the bus window as I was riding home from work.

What do you see that others don’t? How does it make you feel?
Posted by elly stornebrink at 4:49 PM 1 comment: Links to this post

Email ThisBlogThis!Share to TwitterShare to FacebookShare to Pinterest
Labels: can of worms, cloud images, cloud shapes, do you see what I see?, Elly Stornebrink, fireflies, sparkles, twinkling lights, vision 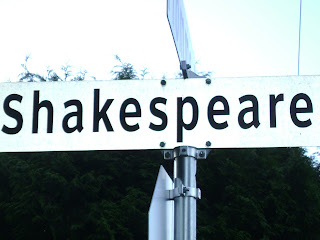 ...
Creeps in this petty pace from day to day,
To the last syllable of recorded time;
And all our yesterdays have lighted fools
The way to dusty death. Out, out, brief candle!
Life is but a walking shadow, a poor player
That struts and frets his hour upon the stage
And then is heard no more. It is a tale
Told by an idiot, full of sound and fury
Signifying nothing.
(Macbeth, Act 5, Scene 5, lines 17-28)

This is King Macbeth's last soliloquy, after discovering that his wife and former partner in crime(!), Lady Macbeth, is dead (at least, according to William Shakespeare). The King of Scotland ponders death and the meaning of life.

One thing I absolutely love to do since childhood that makes me feel (more) alive is playing dress-up - the only reason I love Halloween by the way - as I did, well, a wee tad while delivering the above verses. I was holding a tealight candle with one outstretched palm while speaking with a fake accent, as I rarely, if at all, perform with an accent (other than this piece). I cannot normally roll my r’s unfortunately; however, a wonderfully unique trick that I discovered when learning Spanish remedied this so now I can!

Did my accent actually sound Scottish enough as I had hoped to portray? - and did I look somewhat from that era with a bedsheet (improvising on short notice) attached with an empire waist-fitting belt and a never-ending, all-in-one-piece scarf (whatever they are called). Never mind - excuse - the jeans beneath!

With bedsheet and all, I walked barefoot to the centre of the room during the talent show for the summer camp I attended last weekend, speaking those lines as silly as I may have sounded or appeared, even in dim lighting.

Nevertheless, I enjoy this piece - it is poetry is it not? - which I have memorized since Grade 9. (That was a homework assignment along with perfect punctuation, believe it or not!)

My interpretation is that tomorrow, like manana in Spanish, never comes. It's similar to the movie Groundhog Day in which Bill Murray repeatedly experiences the same day over and over, regretting things he's done or not done, words he's spoken or unspoken.

As of late however, it seems like time has just been whizzing by. And speaking of summer camp and tomorrow, just over a month from today my summer day camp begins!

My hope for me, as well as for you too of course, is that we live life with our cup at least half full if not full, rather than half empty or empty. And furthermore, I hope that we will not regret our life and the path(s) that we walk on.

What are you working towards completing or fulfilling concerning promises, deeds, words and the like that might have been left undone?

Posted by elly stornebrink at 11:33 PM 2 comments: Links to this post