I love videos such as the one above created by Raamayan Ananda, a man I know from the spiritual community in Vancouver. It addresses GMO's (genetically modified organisms), rather, it is an anti-GMO music video that was created to support Prop 522 for GMO labelling.

This first video entitled "Don't Eat It", a parody to Michael Jackson's (MJ's) "Beat It" with partial imagery of MJ's "Thriller" dance routine, has the following storyline: "GMO executives Have Taken Over the Food Chain, a group of dedicated citizens march to face them off in an epic battle, but something nefarious and unexpected happens..."

The lyrics are as follows:

They Told Them Don't You Ever Grow Around Here
Don't Wanna Eat your food, You Better Disappear
The Fire's In Our Eyes And Our Words Are Really Clear
Don't EAT It

You Better Run, You Better Do What You Can
Don't Want no GMO's, You better ditch your plan
We'll fight you to the end, We're making a stand

Show em, its funky, show'em its not right
It DOES matter, who's wrong or right

We've got the politicians dealing our hand
You've got no right to know what's in your fruit and bread
Be like a good sheep, and just do what 'sam' says
JUST EAT IT

Were Out To Get You, Better Leave While You Can
Our kids won't be no lab rats in your business plan
You wanna stay alive, Get GMO's Banned

The short video below, "Plastic State of Mind" is a parody of JAY Z and Alicia Keys' "Empire State of Mind." It is about the ramifications of plastic waste in the form of bags. (Both videos are brilliant in my opinion and I hope you enjoy them as much as I do! Please feel free to share and circulate them as they are important messages.)

These two videos are an example of only one idea (of many) that I have for my non-traditional, co-creative children's/youth choir. Co-creative in that we get to play with ideas - theirs and mine - in creating our own music, rhythms and yes, even rap.

Rap can be especially effective on matters that are close to one's heart and/or the heartbeat of Mother Earth. The results need not be as sophisticated as these videos and that's totally ok. It's the intent and the words and the message that is important.

What are causes close to your heart? Do you take action on them? If so, how often? Do you or can you do so in a creative or artistic manner?

Posted by elly stornebrink at 10:43 PM No comments: Links to this post

To Give and Receive 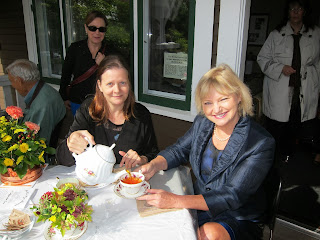 I recently attended Mollie Nye's 100th anniversary on the North Shore in Lynn Valley. There I shared conversation and tea with Jane Thornthwaite, the Liberal MLA for the District of North Vancouver, after having won a new and shiny copper kettle full of bright, autumn-coloured flowers. (See the pot to the right of me.)

The supposed winner of this floral arrangement had missed the call of the draw. I insisted she accept the prize that was meant for her as her number had been drawn. After all, she was busy manning the booth right next to it.

However, since she flatly or politely refused, I graciously accepted her offer. But then did I, really?

When I returned home, I immediately went to my landlady to bestow the gift upon her as I had thought she was sick; her daughter was though so I insisted that they both enjoy it.

It wasn't till a bit later that day when I wondered what message I might be giving to the universe (God), that is, in giving a prize away that I had won and rather quickly too. Was I giving the message that perhaps I wasn't worthy to receive a gift or prize? Or not worth receiving at all? Hmmm.

I realized, or rather relearned that it is truly important to not only give - a great quality of course - but to also receive, and to do so graciously. After all, a giver requires a receiver and vice versa. You cannot have one without the other.

Whether we are speaking about receiving, i.e., accepting the weather (which the forecast initially predicted as rain and cool temperatures, yet later greeted us with bright sun and warmer degrees instead), or serving tea, or winning a gift or prize, it does not matter. The principle applies to all indiscriminately.

Posted by elly stornebrink at 11:01 PM 5 comments: Links to this post

Part 2: The (Healing) Power of Music

The words I believe that came to me were “The healing power of music” as I listened in stereo sound to the words and music of “Anchor Me” by The Tenors from their album, Lead with Your Heart (www.tenorsmusic.com/music).

The initial few lines reminded me of Josh Groban whose voice I fell in love with back in 2004 over stereo headphones – how could I not?! – with a similar themed song “You Raise Me Up” the first piece of music of his that I heard: WOW!

Here is a rendition of “You Raise Me Up” with Josh singing with the famous African Children’s Choir: www.youtube.com/watch?v=0OOhd6R2EiY. (If you ever get a chance, I highly recommend you hear this choir sing live as they are beautiful and amazing fireballs of energy and love.) Here is another version without children http://www.youtube.com/watch?v=Beloi9yluaI if you prefer. (I would love for Josh to sing this with David Foster playing piano, especially since David was instrumental in having Josh sing this song in the first place. Both are so talented and musically inspiring.)

It wasn’t till I listened to variations of these two songs a number of times that I realized why they reminded me of each other. In “Anchor Me,” the line “will you come and anchor me” resembles the words and musical notes of “until you come and sit awhile with me” in “You Raise Me Up.” Also, I find these songs similar in nature in their meaning (at least to me) as well as the emotional theme of sadness/despair, and someone – a particular someone – to buoy one’s spirit.

Both had such a powerful effect on me as they both reverberated strongly within my body sweeping an emotional tide of inner strength and confidence.

How do you find these songs affect you?
Posted by elly stornebrink at 9:37 PM No comments: Links to this post