The writing prompt for NaBloPoMo today is, "If you could be a cast member on any television show, which one would it be? Tell us about your character."

I admit, I haven't watched TV for a long time, except a few movies two Christmas seasons ago. I actually am not sure if I know how to operate the fancy gizmo black box that accompanies it!

And when I turned on the channel station, I was flabbergasted: how many channels?! Whoa, no wonder ADHD is on the rise! Ok, just kidding, but seriously, why THAT many?! That's crazy!

When I was a little girl, I think we had started off with three channels and of course that grew over time.

My favourite show as a child was Walt Disney on Sunday evenings often featuring Jodi Foster as the primary actor on a lot of shows.

Especially as a youngster, I did watch tons of cartoons and shows. Some of my favourites included Picket Fences, a brilliant drama based on controversial cases involving the town's sheriff and judge ending up in court. According to google search, "An aging sheriff tries to keep the peace in a small town plagued by bizarre and violent crimes." Read here for some of the issues they covered: http://en.wikipedia.org/wiki/Picket_Fences. I found it an excellent program to stimulate thinking.

I also enjoyed Ally McBeal, a legal comedy-drama TV series featuring love and infatuation relationships amongst lawyers. According to Wikipedia,

Ally McBeal is a young attorney who joins a prestigious law firm with a highly sexual environment and whose staff includes Ally's ex-boyfriend. The series contains fantasy sequences, flashbacks and voiceovers to reveal what Ally is really thinking. Many episodes contain an appearance by singer Vonda Shepard, who performed the show's theme song.

What I loved most were the special effects, animated and comedic in nature, as well as hearing Ally's thoughts. That show I considered my laughter therapy for the week.

Here are some of the characters dancing in the washroom pre-show to Barry White's deep and sexy voice - listen to the beginning when he talks: ;)

And here is a video clip of Episode 1 with a taste of some special effects: https://www.youtube.com/watch?v=4lJcvWfmItk 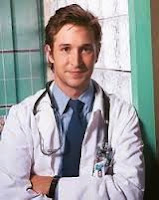 And then of course there were shows that I loved due to certain characters, ahem, had a crush on one of the main actors. For instance Noah Wyle in ER (short for Emergency Room) as follows:

And also Eric James McCormack in Lonesome Dove: The Outlaw Years and also some episodes of Will & Grace. 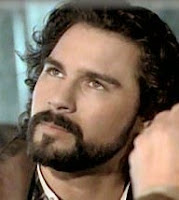 I think I would love to either be a patient seen by 'Dr. John Carter' (played by Noah Wyle) on a regular basis or be the love interest opposite 'Clay Mosby' (played by Eric McCormack's) antagonist character. ;) Ooh la la! ;) ;) (that deserves a double wink!)

On an aside, in my post Envy AND Kindness: What a Combo! - http://xpressyouressence.blogspot.ca/2014/11/envy-and-kindness-what-combo.html - I mentioned some of my favourite 'characters' online known as fiction blogging writers or the like (whatever they call themselves), whom I met through a few blogging challenges.

Now I would like to feature a number of non-fiction bloggers who are also extremely gifted and talented in their writings, in no particular order: Corinne Rodrigues, Vidya Sury, Usha Menon, Carol Graham, Amy Bovaird, Francene Stanley, Judy Yaron, Penny McDaniel, Rajlakshmi H. Boruah, and Asiya Fathima (aka Asma Feroes).

Perhaps one day I can be a 'cast member' on my non-fiction blogging friends' posts - I have so far at least on one! - or likewise on mine! ;)<3
Posted by elly stornebrink at 11:51 PM