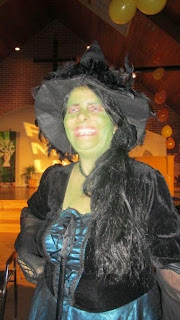 Some of you have discovered my love of Halloween, dressing up for it that is! You may have discovered this through my post two days ago, All Hallows' Eve AKA Hallowe'en 2014: http://xpressyouressence.blogspot.ca/2014/10/all-hallows-eve-aka-halloween-2014.html
My love for dressing up started when I was a young girl and put on my mother's shoes walking down a few steps - don't know how! - at home to greet my Mom with my newfound discovery. I have no recollection of what my mother said though I got the dress-up bug since that day I swear!

Sometimes, it takes only one thing for me to get an inspirational hit for a costume idea. And sometimes even, I know the year before what my Halloween costume will be the following year! ;)

I wish I had my photos all digitalized as I have some great costumes over the years, though they are in hard copy format. (I would need to learn how to convert them just as the Punjabi suit I mentioned the other day that some of you wanted to see as well. One day, hopefully soon.) 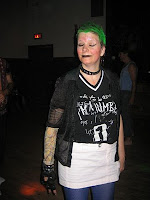 On October 30, 2011 I posted one of my favourite Halloween costumes: http://xpressyouressence.blogspot.ca/2011/10/safe-and-happy-halloween.html. This costume was inspired by my head, my lack of hair that is as ...well, read the blog post and find out! ;)

This year's costume originated from a toothless gap as I had a dead, i.e., infected front (bottom) tooth extracted about 1-1/2 years ago. I had never been a witch for Halloween and the thought came to me to dress up as one. I didn't last year though as someone else at work was going to be dressing up as one and I didn't want to take away from their costume, nor mine for that matter!

My plan was to somehow modernize my look but I wasn't quite sure how. Whilst shopping at a local Salvation Army thrift store, I discovered this somewhat fancy-looking dress that appealed to me. In fact, I actually thought it looked rather pirate-like; however, I prefer to use clothing – I don’t sew – that is multipurpose in nature so I purchased it for a great price.

That was the beginning piece of my to-be-witch outfit. Then followed a velvet, feathered brimmed hat – classy, snazzy, dressy – that matched the velvet top of the dress. Then later, I found a pair of laced gloves that matched the laced front top of the dress as well as my fishnet stockings. A patent-looking pair of boots matched by a patent purse – I did say ‘modern’ witch after all, didn’t I? - that I already owned, along with my raindrop umbrella (instead of a broom) as it was raining after all, completed the picture.

Oh almost. Actually, my long black wig along with the green foundation makeup - are you familiar with Elphaba from 'Wicked' the musical? - that kept interfering with the wig or vice versa, and black lipped and eyed features finished the look for me. The fake nails were a disaster and would not stay on. I should have painted my own nails as I had grown them long, long enough to showcase my long, witch-like fingers. ;) 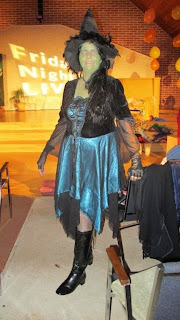 I was deliberating using my coloured, burgundy hair and it would have been okay, though with the style of dress and in particular the hat, the long hair seemed to be more appropriate.

In the end, I think I was more of a hybrid witch, a touch traditional and more modern with Elphaba as my muse, the supposed wicked witch of the West based on the The Wizard of Oz. (May 31, 2012 ....http://xpressyouressence.blogspot.ca/2012/05/defying-gravity-so-no-one-can-steal.html) Check out this video of Idina Menzel singing "Defying Gravity," https://www.youtube.com/watch?feature=player_detailpage&v=q3CQhEEP-fU, one of the key songs that I blogged about in part.

Just a note that wigs and all-over face makeup do not get along very well at all! Till next Halloween…