There is so much I could write about now, and anytime for that matter – I’d love to write more often, but am quite busy with work and other commitments (called life! ; ) – especially lately, as there have been some interesting occurrences.

You could say I have been mulling about my next blog posting after the last one, including whether to write about mulled wine, something totally and completely different for a (pardon-the pun, refreshing) change. 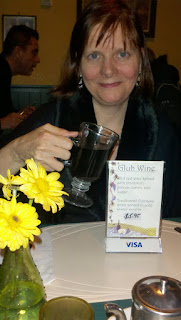 I truly have been pondering over mulled wine aka (also known as) Gluhwein, pronounced glue-vine) since drinking this concoction at the Vancouver Christmas Market (http://vancouverchristmasmarket.com/) last December. (I really think they should change the name of this market, though situated in Vancouver, as it is a German-based market.)

Gluh wine or Gluhwein (in German) translates more or less to "glow wine" apparently from the hot irons once used for mulling – what is that?! – and the effect of the wine: it makes you glow inside.

It is a mulled wine or (European alcoholic) cider (not apple juice), a beverage popular in German-speaking countries (such as Austria); is usually made with red wine along with various spices, citrus and sugar; served hot or warm; alcoholic (with a shot of rum or other liquor) or non-alcoholic; and is a traditional drink during winter, especially around the Christmas holidays.

In the Netherlands (where I was born), it is known as bisschopswijn (literally "bishop's wine"), though I am not familiar with it. It is made using oranges rather than lemons and is a typical drink during the Sinterklaas holidays (the Dutch version of Santa Claus who looks like a bishop). (Info from Wikipedia, http://en.wikipedia.org/wiki/Main_Page)

Walking outdoors at the Christmas market downtown warranted a little – or perhaps a lot – of something to keep the chill at bay, and Gluhwein was the perfect answer. I was grateful for it as it warmed up my innards reflected by my rosy (or glowing) cheeks.

Having tasted a sample of mulled cider during a Christmas tree festival at the nearby Nourish Market (www.nourishmarket.ca) in North Vancouver made me curious enough to ask for the recipe. So I asked. And it is simple to make. 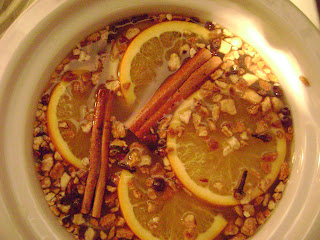 You can check online for various recipes though I used sweet apple juice, citrus fruit (of oranges, lemons, and limes) as well as spices (cinnamon, cloves, and the like).

For my recent birthday, I celebrated with a friend at Jagerhof, a restaurant specializing in Austrian/German food where I ordered their GluhWein. Delicious! I highly recommend it along with the Weiner Schnitzel, a traditional Austrian meal (though my Mom who is from this homeland used to make it with veal).

What is something different you have tried recently?
Posted by elly stornebrink at 8:39 AM No comments: Links to this post 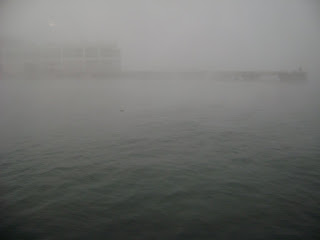 So far in 2013, the future feels like a fog similar to the photo that I took recently from the Seabus heading to work (as shown).

When I was in my teens, the future seemed bleak to me, worse than foggy weather. It appeared black and felt like an abyss. I was afraid of the future: it intimidated me and threatened to engulf me or so it felt.

Since then the future has come to me in different ways. Depending on my mood and/or life's circumstances, it sometimes shows up crystal clear like a bright, sunny day, though more often than not it's hazy or cloudy.

Armageddon hasn't occurred as a number of people suspected with the end of the Mayan calendar - we're still here on planet Earth. Thank God for that! I still haven't used all my unused talents!

My hope and dream for you and me is that we bring forth our unique talents and gifts before we die - why not now? this year? - and contribute them to the world.

What can you (and I) do to begin that process? What is the first step we can take?