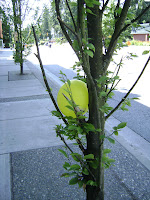 Another anniversary. The last one was to celebrate my one-year birth of my blog last July. This time it’s to celebrate my 20th anniversary in Vancouver, today (and the first day of Spring depending on the calendar year)! It also happens to be my favourite season.

Wow! I can’t believe it! How time flies by, especially as you get older! ; )

While working for a relatively large private benefits and consulting company in big T.O. (aka Toronto) in Ontario, Canada, I had posted quite a number of calendar pictures featuring landscapes of BC and Alberta.

I wanted to go out west to witness this beautiful piece of Canadian soil, mainly because I wanted to experience Expo ’86. This as a result of an attractive scenic shot of Vancouver, BC, primarily of downtown with Stanley Park, the surrounding ocean, and the mountains in the distance.

I may have mentioned it to colleagues including my bosses(?) during the recession at the end of and/or beginning of the 21st century when I was laid off (for what I believe was the first time in my life).

Before that occurred however, I bought a return ticket to Vancouver as my plan was to check out the city before I moved there. When finding out that I was to be laid off, it changed my plans accordingly. Instead, I ended up flying one way on a return ticket; first time to do so but feeling I didn’t have much choice as the economy was pretty bad and I wanted a career change anyway.

What also made me decide to move to Vancouver were my parents, my mother in particular as they were planning to move to one of three Canadian cities out west after my father’s retirement.

My mother declared to me upon a visit to my home with my father in tow, “Elly, if I were you, I would move either to Vancouver or Victoria. It’s beautiful out there, the weather’s better” …blah, blah, blah. I still recall that comment vividly.

So I asked my parents questions though what specifically I can only guess as I can’t recall that part of the conversation, probably stuff like the weather, housing, employment, etc.

And interestingly enough, a man who just happened to be visiting his family in Toronto and who was from Vancouver dropped by after my parents visit. I knew him from a few years prior when he visited the church I used to attend. Then I peppered him with lots of questions, some similar to what I had asked my folks to get another perspective.

When he left, I pondered over both his and my parents’ responses and the most fascinating thing occurred. I felt so happy like I had never felt before. I knew in my heart it was the right decision, without a doubt, without question. 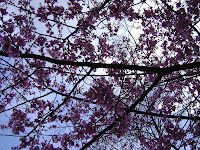 It was confirmed when I moved here during the generally rainy spring season: the entire week was sunny and full of beautiful cherry blossoms in the city!

When have you felt the knock of Spirit on your doorstep or your heart? How has it come to you?
Posted by elly stornebrink at 3:00 PM 6 comments: Links to this post 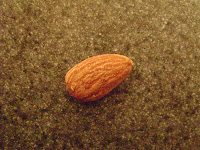 “I’m not ready to go yet!” I silently pleaded as a prayer whilst struggling to catch my breath. I almost died, was it only a short three weeks ago? And not just once, but twice, almost!

One time I threw back some mixed nuts – don’t ever try that! – and one of them, probably an almond, got stuck at the back of my throat, waaay down. I couldn’t do anything at first and was aware that I couldn’t breathe, at least through my mouth.

I think part of me (the inner me) was quite scared (that I could die), yet another part (my outer me) was surprisingly calm – that I actually don’t remember how it became unstuck, but I’m grateful it did. I think I leant forward and tapped my back or tried coughing; I believe I may have blocked the fearful memory.

Wow! Close call! Within the same week, I almost got run over by a vehicle passing in the dark near my home. Whew! Another close call!

What’s happening? What’s all this about? Red Alert! Need to pay more attention. Focus on the here and now. Ground self. Breathe. And breathe deep! This is what was going through my mind after the fact.

I’ve had this sense lately (since about January) that a lot of people (I know) are going to die this year. I don’t like that thought nor do I like the resulting feeling and certainly hope that I’m wrong.

Although I don’t wish to dwell on this of course, I already know of about four deaths so far this year (within less than two months) upon this incident in mid-February: a friend and former roommate’s mother passing, a work colleague’s brother dying, another work colleague’s father dying, a former tenant (of the place I lived in before) found dead in a park recently.

That’s way too many when I consider I’ve only attended maybe two funerals in my life, thus far. I prefer it that way, nice and easy, and slow!

Though I’ve been close to death several times myself, I’m definitely not ready to go yet. After all, not only do I have to tidy up my home beforehand, I have a mission to accomplish! ; )

Have you ever been close to death? If so, what saved you and/or what keeps you alive?
Posted by elly stornebrink at 9:44 PM No comments: Links to this post

Perhaps analogous to the heart-shaped images and objects I come upon (see previous posting, Feb. 17th), a gift that I believe I possess is the ability to know or see into a person’s heart, their nature or essence; more like their personality rather than their (true) soul essence. It’s as if I can see into the depth of their emotional heart, their being.

Questions like, “Do I like this person? Can I trust them? What are they like?" I can usually answer upon initially meeting them, often without conversing or sometimes a bit. This even comes across through emails that might be scant in terms of number of words. I have an intuitive knowing (or claircognizance) about the person.

Do you ever experience anything like this? And if so, how does it come to you? I’d love to know!
Posted by elly stornebrink at 5:53 PM No comments: Links to this post