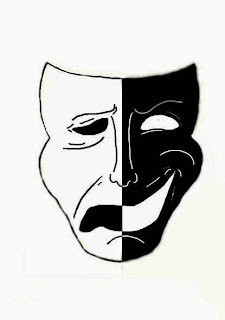 The stigma of mental illness is real (as are so many other things too of course!). It’s a cold fact in this seemingly harsh world at times that we live in.

I say that as I personally know (and knew) people who suffer from various forms of depression, anxiety, bipolar disorder, PTSD (post-traumatic stress disorder), ADHD (attention deficit hyperactivity disorder), and the like.

I generally speak to and treat these people as “common folk” that is without special treatment or gloves. I don’t think they wish to be treated or handled any differently, other than perhaps their uniqueness noticed!

What I notice is that what is a lack in one area – mental health – is made up for so-to-speak in another area. I am beginning to believe that this may apply to most, if not all disabilities, whether it is a physical or developmental disability, a learning disability or mental health challenge, an intellectual disability or the like.

It seems, to me at least, that there is a creative genius lurking somewhere within these so-called “mental health disorders.” Robin Williams was an example of this and indeed, people who knew him or got to him remarked that he was “a genius” or “brilliant.”

Here are some other personal – to me – examples: a man, I know, who suffers from post-traumatic stress disorder (PTSD) who asks deep and brilliant – read that as ‘creative’ – questions. A health care professional recognized him as having eidetic memory, something which I had never heard of before, and is apparently extremely rare in adults. His experiences are both visually and auditorally, particularly with conversations. (Google this if you are interested for details as there seem to be problems with some of the links.)

I know at least four people with bipolar disorder, formerly known as "manic depression" a more negative label in my opinion. One is a daughter of a friend of mine who demonstrates brilliance in the area of creativity, particularly in the arts: she is able to sing opera; paint; knit, sew and other such endeavours.

Two women – one was introduced to me through the other – who have become dear friends of mine. One I see more often, the other more as an acquaintance as her life is so busy. Both are extremely brilliant in thinking of wonderful and sometimes outrageously creative ideas. They are also funny and a bit quirky too, though the latter sometimes comes out more in their style of outfits than anything else.

And you won’t know who they are as I do not connect with them through social media to keep their lives private. That is what they wish and prefer probably due to the stigma of mental illness. One is more concerned about her career though. The other probably couldn’t care less as she is self-employed and doesn’t have the time nor interest for social media!

This is only one of many reasons why we need to speak more openly as mental illness is so prevalent in our society. One out of five people have or will suffer from some form of a mental health disability in their lives. That’s a high percentage of our population!

Do you and/or do you know anyone with a form of mental illness? How do others respond to you and/or to these people you know?

By the way, as an aside, tonight is a Supermoon (http://xpressyouressence.blogspot.ca/2014/07/supermoon.html). Do you think the full moon especially affects people with mental health disabilities, people who may be more "sensitive?" I wonder...
Posted by elly stornebrink at 11:18 AM