Defying Gravity so No One can Steal Your Rock ‘N Roll!

Some of the lyrics from one of my favourite musicals the Burstin' with Broadway choir (http://burstinwithbroadway.com/) that I sang with this past weekend at the Kay Meek Centre (http://www.kaymeekcentre.com/), Defying Gravity, an original arrangement by Roger Emerson (http://www.rogeremerson.com/) is reflective of this – my – inner voice, at least in relation to my Children's Co-Creative Choir: “I’m through with playing by the rules of someone else’s game. Too late for second guessing, too late to go back to sleep. It’s time to trust my instincts, close my eyes and leap. It’s time to try defying gravity..."

Almost everyone I talk to seems to love the idea of this defying-gravity-so-no-one-can-steal-your-rock-'n-roll choir, even the Marketing Director of the Vancouver International Children's Festival Society (http://www.childrensfestival.ca/) whom I spoke to a few days ago! And I didn’t even finish telling her about it!

So the questions that come up for me now are: What am I missing or how am I getting in the way? What are the obstacles of the children not showing up, rather the parents not signing them up, yet? Hmmm...perhaps, rather than find out what the missing link is, maybe it's better for me to rephrase the question: What do I need to do in order to have this choir show up?! Ah, different words, different perspective.

Could it be that I am simply too attached to it? Possibly, after all the original idea of a children’s choir came to me at about 3 a.m. a number of years ago. (You can read more about this in my first two blog postings: (1) Call to Action and (2) Why Me? Why this Choir?)

If you read my earliest blog posting, I even got the name Angelic Voices as a choir name at that time though have since seen that name for a children’s choir on the North Shore, in North Vancouver where I live. Such a small world we live in! (I’ve had lots of those kinds of experiences since moving here just over 20 years ago.

In addition to initially receiving a few ideas and a lot more since then, I also had a vision last summer of an opening scene for the choir.

Thus, for all those reasons and more, I know that if and when this choir materializes, I will cry. Would you like to know why? (And I’m not just saying that to rhyme!) Simply, out of gratitude. Gratitude because I believe the original idea came from God/Spirit and it has become my heart’s desire, if not my soul’s desire.

As I type that, some of the lyrics to Steal Your Rock 'n Roll from the musical 'Memphis' comes to mind, “I swallowed my fear, followed my heart right here. Listen to your soul, listen to your soul. Heed it, ya need it. Let it make, let it make you whole. And if ya listen to the beat and hear what’s in your soul, you’ll never let anyone steal your rock ‘n’ roll!


It’s interesting how art can imitate life, don’t you think?! ; )

After the show and the following couple of days in particular, my mind was constantly filled with lyrics of musicals, including a verse and song title from Spamalot that the men sang, “Always Look on the Bright Side of Life” (http://en.wikipedia.org/wiki/Spamalot). Wise advice indeed, I might wish to heed! ;)

Ask yourself – and feel free to answer below – Do you ever defy gravity (in a positive way) by being true to your heart, your soul’s essence? Do you pay attention to that still small inner voice and heed it, and, if so, how?
Posted by elly stornebrink at 11:59 PM No comments: Links to this post 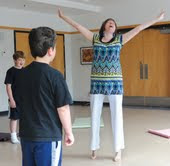 No, I’m not speaking about a ‘bad’ incident or mishap.  Rather, I’m referring to the launch of my intro to the summer camp of a community co-creative children’s choir on Saturday, May 5th at John Braithwaite Community Centre.

Though only a few kids showed up, at least they showed up, that is, that the parents brought them.  And one parent, plus an adult friend showed up too for support by participating in the various exercises I ran.

And although I was supported and I was exuberant, it wasn’t 100% successful.  How could it be?  If it was, would I grow and learn?  No!  Thus, it wasn’t a complete failure either.

It seemed that I made some so-called mistakes mainly through things that I didn’t say, things that I could have said, things that I should have said.  Namely what I’m referring to is speaking about goals of the intro as well as the why of some of the exercises we were doing – how did I miss that?! – in addition to talking more about the summer camp.

I think it was a combination of excitement and nerves:  new kids, adults, North Shore News photographer, and intro launch as well as the feeling perhaps of the need to entertain or inspire the children.  I had too many exercises, focusing more on doing rather than just simply being, rather than allowing more space in between!

Expressive arts therapy terms this as “liminal space.”  It is analogous to being on the threshold, the edge of the line, the space that occurs between here and there.  Yet that is the place where magic can occur, where clarity can reside or beckon you to draw nearer.  It is akin to the space or gap between the thoughts as in meditation, between the notes as in music, the silence in between all that.  It is both powerful and (potentially) deep.

Not until after reading the feedback forms later that day, did I feel both happy and deflated.  Though initially berating myself for a few days following, I put this into perspective:  the event occurred, people participated, and I got feedback!

The simple and honest feedback from the children gives me the impetus that I need to create an even better program.

Overall, a few humbling lessons for me:  (1) a failure can be seen as a success if you apply the learning(s) from the experience (2) there is grace in humility (3) whether to acknowledge God, Spirit, Source, the Universe – use which term you prefer – I’m not the one ultimately in control!

Keeps me on my toes … on the edge of my seat … on the line…in liminal space.

What mistakes have you made that have turned out to be successes in disguise?  Like, “what’s right about this?!”
Posted by elly stornebrink at 12:00 AM 1 comment: Links to this post