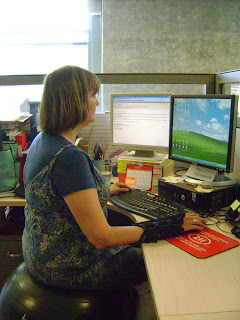 Today's NaBloPoMo prompt asks, "Have you ever had extended writer's block? How long did it last? What did you do to break out of it, and do you have tips for other bloggers?"

I did experience a bit of a writer’s block that lasted a short period, less than two months and maybe even less than that. From almost mid-November 2010 to almost mid-January in 2011. I actually wrote a post on that, appropriately entitled, "Lost ... and Found."

It was an extremely busy time for me as, at that time, I was searching for a place to live on my own (having moved from a house with roommates) and everything that was associated with that, including moving boxes and stuff from storage, downsizing including donating and selling stuff, and the actual process of moving. On top of that was the Christmas season filled with attending choir concerts, baking my family's traditional European cookie recipe, with my birthday following shortly thereafter.

This is an excerpt from the blog I referred to above:

I have an expression that I made up about myself to describe some of my passions: "If I don’t sing or dance, I’m either sick or depressed."

Similarly, I sometimes can't write. It’s usually a matter of being either really busy and/or not feeling inspired. My preference is to write ‘in the flow’ when words come intuitively to me (as they often do) or through my fingers when I type (or write). When they don't, I prefer not to write.

Unfortunately, not all my writing comes from Spirit, that state of natural flow and grace (though I wish of course! That would be ideal!). Though ideas for my posts flow for the most part, I usually have to 'work' at my writing when I force a deadline upon myself.

Acquiring writer's block (if you can call it that) was the other situation that took place. I was so excited and ready to post a blog, an inspirational piece entitled ‘A Tribute to My Parents.' Not only did the words flow easily and effortlessly across the page (that I know came from Spirit), but also did my tears flow. I really felt what I wrote at such a deep level as I was in an incredible state of deep gratitude to my parents.

Even though I was certain I had saved this writing piece somewhere in a computer file, I realized later that I actually hadn’t because I couldn’t find it anywhere (either on my home or work computer!). Now, how frustrating is that? Have you ever experienced that? If so, you understand what I’m talking about!

Well, since I didn’t feel like rewriting it because it wouldn’t be serving the original script justice, I’ll explain the essence of it and write about something else briefly.


For the full story, read my original post that had an essence of writer's block in it: http://xpressyouressence.blogspot.ca/2011/01/lost-and-found.html

Before and after this period, I generally wrote every two weeks with the odd exception of writing an additional weekly post or less frequently by missing a week. I purposely committed to writing biweekly as I felt once a week might be too much, at that time anyway. Now you can see why these daily blog writing challenges are a challenge for me! ;)

Have you ever experienced writer's block? If so, what did you do to get out of it?

I'm linking this to Ultra Blog Challenge.
Posted by elly stornebrink at 10:34 PM