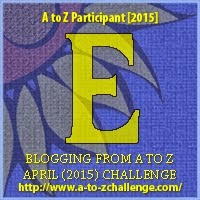 Today's 'heart things, heart strings' theme for the letter E in the A to Z challenge is not Euphoric or Euphoria as originally planned, but Emotions!

E is a most excellent letter, not because it is the beginning of my Dutch and original birth names, but think of all these wonderful words: enthusiasm, excel, excellent, exhuberant, etc. This is why I originally picked the word euphoria to capture the letter E for today. However, emotions came to me and I sense that is the right word to explore today.

But before I do, did you know that the word enthusiasm means "possessed by a God" or "inspired by a God" or simply "the God inside." I understood it to mean "with God." Regardless, it is a divine word (pardon the pun), isn't it?

Speaking of emotions, there seems to be a lot of confusion between that word and feelings isn't there? Simply put, I think of emotions as energy in motion - think e-motion or emote, to express emotion. However, I had to look it up to differentiate between the two.

Since there seems to be some possible contradictions and confusion, I have opted for a search on the meaning: Google's definition is as follows: Emotion is "a natural instinctive state of mind deriving from one's circumstances, mood, or relationships with others." Is that clear (enough)?

Karla McLaren, social science researcher, has this to say: "An emotion is a physiological experience (or state of awareness) that gives you information about the world...."

Another source defines emotions as follows:

"Emotions are chemicals released in response to our interpretation of a specific trigger. It takes our brains about 1/4 second to identify the trigger, and about another 1/4 second to produce the chemicals. By the way, emotion chemicals are released throughout our bodies, not just in our brains, and they form a kind of feedback loop between our brains and bodies. They last for about six seconds."

This reminds me of the movie "What the Bleep do we Know!? (http://en.wikipedia.org/wiki/What_the_Bleep_Do_We_Know!%3F) which I think illustrates the concept of emotions extremely well; however, I saw it years ago and is not so fresh in my mind!

It is important that we express our emotions safely and as best we can as emotions affect our health, including our heart. The heart either expands or constricts metaphorically.

Think of expressions such as a person "dying of a broken heart" or "down in the dumps" or the like. As time goes on, emotions stick to us so-to-speak and become disguised as illnesses and the like. There is proof of this; however, you won't find it in mainstream society.

Do you have a tendency toward one or two primary emotions than others in terms of being?

P.S. Photo of me by Roberto Kaplan. I forgot to mention yesterday that Sufi whirling dervishes dance to a meditative state.
Posted by elly stornebrink at 10:19 AM