Tantalizing Tuesday: Supermoon No. 5 in 2014 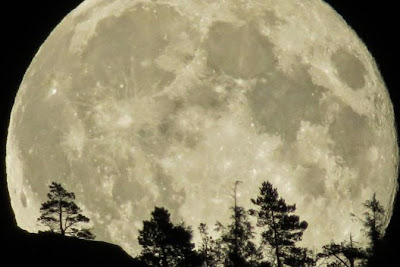 Did you see that big, beautiful, bright ball in the sky last night, at least in this, my part of the world? That was our fifth and final Supermoon this year.

I find the moon sexy: circular (i.e., curvy), full, enlightened, and mysterious, and also with a bright glow. Doesn't that sound feminine and divine? ;)

Do you believe that there are more accidents/deaths/suicides during a full moon, maybe even more so with a Supermoon? Or did we just as a mass collective decide that? That is, did we believe that, agree to it, and thus create that? "What?!" you might ask, "Are you crazy?!" Perhaps, but not in this regard! ;)

You see there is at least one, if not two laws or principles that operate here: One is the 'Law of Attraction' also known as (aka) 'LOA.' (http://en.wikipedia.org/wiki/Law_of_attraction_%28New_Thought%29)

The other is known by various names including the "observer-expectancy effect", "a form of reactivity in which a researcher's cognitive bias causes them to unconsciously influence the participants of an experiment" (http://en.wikipedia.org/wiki/Observer-expectancy_effect) or simply known as the "observer effect" (http://en.wikipedia.org/wiki/Observer_effect_%28physics%29).

Essentially, that means that what you focus your attention on acts in a way that you expect it to! You basically see and/or get what you expect. Isn't that phenomental? Astounding even?

Hopefully this will clearly indicate that I am not crazy when I stated the above comment: the one where you thought perhaps that I was "off my rocker?" ;)

What do you think of the observer effect? And theories around the full moon including the Supermoon?
Posted by elly stornebrink at 6:44 PM