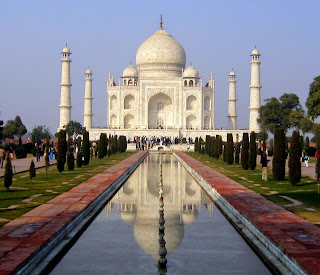 Photo of Taj Mahal from Wikipedia

In lieu of my recent Talented Thursday theme, I have a surprise, a special surprise for you! I have a guest blogger who is writing on my behalf, in place of me! Woohoo! :)

This female blogger has become a dear soul 'sista' (sister) of mine since meeting her in the blogging world through another blog challenge. We met through her stories - I was SO fascinated by them - the way she wrote with sharply curved storylines that reminded me so much of Agatha Christie's writing style - a mystery writer - in particular Murder on the Orient Express, the first book of hers that I read: you never knew 'whodunit.' (See http://en.wikipedia.org/wiki/Whodunit).

Vinodini Iyer is a blogger, writer, poet, design professional, and a 'lost' painter based out of India. She calls herself a lost painter because, although she was academically trained in the Fine Arts, somewhere along the way she lost her touch with painting. Writing is a childhood passion she reconnected with a few years back and there's been no looking back for her ever since. She blogs at http://vinodinii.blogspot.in/.

As a child she would haphazardly scribble amateur poetry on the last page of her school notebooks, in particularly boring classes. Her mother would in turn find those pieces of writings and compile them in a file and send some of them to the local newspapers to be published in the kiddies column.

She started blogging about six years ago, but has turned into an active blogger only a few months back after participating in a few blogging challenges. One of these challenges is where she met me.

She writes about her random experiences in life. She is fascinated by the unknown mystical and pursues the same with a childlike wonder. She considers herself a gypsy at heart, a gypsy who loves writing about her journey of life through various voices, sometimes her own, sometimes of her characters! They could be in the form of essays, poetry, or short stories. Of late though, she has been veering more towards short stories. One of her short stories is about to be published in an anthology.

I'll let my blogging sista take over from here ...


Elly and I have known each other for about two months now. While she enjoys reading my stories with twisted endings, I’m in awe of the tremendously informative blog posts she writes with careful research to back her write-ups with. Since we had decided to do a guest post on each other’s blog, after she obliged me with a wonderful story on my blog on August 1, 2014 (http://vinodinii.blogspot.in/2014/08/my-newfound-friend.html), it is time for me to invade Elly’s blog space. I chose to talk about India in this post for Elly’s apparent interest in the topic.

~*~*~*~
While India boasts of a rich and vibrant culture, there are a few misconceptions the world has about India. This observation has been made on certain generalized assumptions one comes across while interacting with people outside India.

India has also been ridiculously and falsely perceived as a poverty-stricken nation. Ridiculous assumption, specifically because the world is well aware of the royal heritage and background that this country originates from. Our historical monuments, rich cultural resources, and lifestyle are a testimony to the wealth of culture and riches this nation boasts of. So, the documentaries and photographs depicting the dreary poverty in India that you might have chanced upon are only one side of the story. This is the land of the aristocratic Tatas, Birlas, and Ambanis. Go on, Google them if you haven’t heard about them.

People visiting India for the first time, at times are pleasantly surprised or rather disappointed to see Indians commuting by cars and buses as opposed to elephants. Fortunately technology spared the elephants long back, sent them back to the jungles, where they belonged, and gave us vehicles that ran on fuel. Also, a few people come to India with the hopes of seeing snake charmers on the streets, but, well, the snake charmer has probably become redundant long back and has switched to selling cheap cellphone covers outside the railway station.

At times, it is the fair-skinned Indian baby born in a foreign land that evokes awe, for the color of its skin. Especially, since it is another general assumption that Indians have either black- or brown-toned skin. Well we sure are proud of our honey-colored complexion, but just as there are different hair colors like red-heads, brunettes, and blondes elsewhere in the world; in the same manner Indians also have a wide variety of skin colors and facial features. And hence, we do have fair-skinned people around along with a wide assortment of wheatish, honey, and black skin. The best part is that our sharp features blend beautifully with almost all skin tones. I say this at the risk of sounding vain and immodest, but the fact remains. 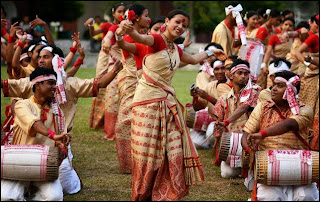 A few months back, I met a lady from Sweden who was confused when I told her that not all Indians speak Hindi or Sanskrit. We have 29 states and 7 union territories in India which speak 18 different languages! And yes, for people who thought there was a language called ‘Indian’ (yes, I’ve heard that too!), you got it wrong. There’s no such language. Just as there is no language called ‘American.’ Hindi is our national language. Also, ‘Hindi’ is not a religion and ‘Hindu’ is not a language. Also not all Indians are Hindus; there are Indians who follow other faiths like Islam, Christianity, Buddhism, Sikhism, and Zoroastrianism. Most of the educated Indians these days are well versed in English.


My whole intention of writing this post for Elly’s blog is to enlighten the ones who are genuinely interested in knowing more about India, but have been thriving on half-baked information that the media feeds them with. There are many more such myths and illusions that people outside India carry that I have not delved into here, or else this post would have gone much longer than acceptable limits of maintaining the interest of the reader.

Elly, thank you so much for inviting me to ramble on your blog space. For once, I did not write a thought-out story, but just went with the flow of words to come up with a blog post that I thought would hopefully add some value to your blog.

~*~*~*~
I am particularly honoured that Vinodini is gracing my blog, zesting it up with a bit of spice and writing about a topic that has always intrigued me. Thank you Vinodini for sharing this enlightening post on India. Namaste.

I encourage you readers to share your thoughts in the comments below to support my wonderful friend in her attempt to write in my style.
Posted by elly stornebrink at 5:55 PM