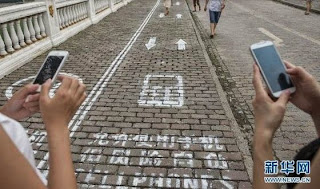 I love to invent words from time to time, though with increasing technology and inventions, new terminology is also being added to our everyday language.

Take this word for instance: nomophobia. Have you ever heard of it? If you were to guess what it means, would you do so correctly? No matter, here's a BIG clue: 0http://en.wikipedia.org/wiki/Nomophobia

Did you guess right? The word 'nomophobia' is actually made up of three words: 'no' plus 'mobile' plus 'phobia' to make what looks like a compound word. It essentially means a fear of being without your phone.

Isn't that a seemingly reality as cellphone addiction is becoming more common. I wouldn't be surprised if it is replacing internet addiction.

In Chongqing, China (http://en.wikipedia.org/wiki/Chongqing), a 30-metre (100-foot) stretch of sidewalk was specifically created for nomophobics in a theme park. Can you believe that?! I wonder about other parts of the world!

This sidewalk lane has the word "cellphones" along with a symbol for visual display. The lane is separated with two thick white lines.

Being a form of a 'walkie-talkie' (http://en.wikipedia.org/wiki/Walkie-talkie) - us humans - would require a certain amount of control and discipline to talk and walk at the same time, preferably in a relatively straight line. That may be considered a talent.

So much in fact, that the post-secondary school near my work featured a 'road safety' challenge with orange traffic cones, lane lines, and the like as part of student orientation last week. I would have participated except that I recently got my new cellphone and didn't quite know how to work it just yet. I think it may have been an enlightening experiment.

Are you a 'walkie-talkie?' Are you able to walk without hitting people, poles, walls, and the like? (Apparently, that's quite common.) If so, you are talented, though I wouldn't recommend it! ;) <3
Posted by elly stornebrink at 10:16 AM