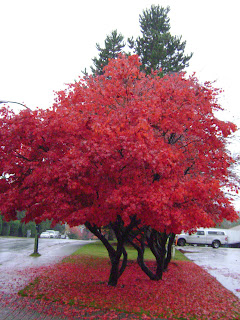 Guess what day today is? It's the first day of autumn equinox when day and night are approximately equal in length in terms of time.

During an equinox, the Earth's North and South poles are not tilted toward or away from the Sun, and the duration of daylight is theoretically the same at all points on Earth's surface (http://en.wikipedia.org/wiki/Equinox).

This is what it looks like from the sun's and earth's perspective (from Wikipedia): 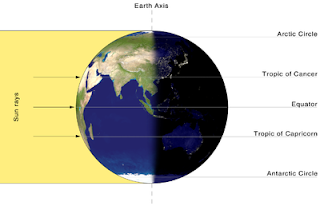 'Autumn' also called 'Fall' (http://en.wikipedia.org/wiki/Autum) is a season best experienced in parts of North America, that is, Canada and the United States.* Autumn is well-renowned in parts of Ontario (a province in Canada) in particular, though it is also revered in various areas of British Columbia (BC) and Alberta (two other provinces), especially in the Rocky mountains. In addition, the Laurentian mountain range in Quebec and some of the eastern-most provinces like New Brunswick, Nova Scotia, and Prince Edward Island (PEI), harbour glorious autumn landscapes. 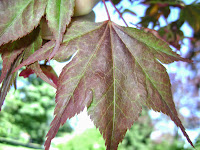 A photo of a maple leaf I took two years ago

*According to The Weather Network (http://www.theweathernetwork.com/weather/canada/british-columbia/vancouver), “\The English who settled the eastern American seaboard brought the word ‘Fall’ with them from the homeland. The English who stayed home eventually adopted the word ‘Autumn.’

Do you like or love the season of autumn? If so, where do you like to experience it? Where in the world has beautiful autumns?

Tomorrow, I will share with you what autumn looks like from the eyes of a 15- or 16-year old child. So stay tuned as tomorrow is another type of tree day!
Posted by elly stornebrink at 9:09 PM