Photo I took of an artistically swirled latte 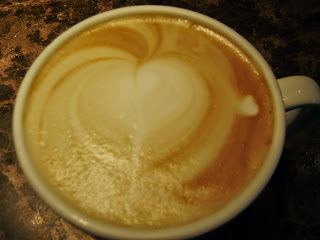 After this week, especially yesterday's post, I feel like I could use a break - a cup of coffee (espresso-type) drink or rather, a BIG cup of soothing Earl Grey Tea please!

This week was rather interesting with me discovering that it was World Suicide Prevention Day which I never heard of before. The following is a really great and simple, easy-to-read site with some startling facts and stats: http://en.wikipedia.org/wiki/World_Suicide_Prevention_Day. This year the theme was "One World." Suicide Prevention Week was also this week.

My posts were as follows: Here’s a recap of my week’s posts starting with Monday, September 8th:

I had originally intended to title this post as "Mental Health Monday..." but it would have been too long a title and it was long enough already. I felt and wanted it to be part of this series that I had started after the death of Robin Williams, a beloved American actor and comedian.

Instead, the post became "Part 3: Aftermath of a Brilliant Comic’s Death: Funnyman AKA Robin Williams" which was about the stigma of mental illness. I know and have known a number of people with mental health issues, primarily depression, but also PTSD (post-traumatic stress disorder), bipolar disorder, etc. They are still people, still humans, just like you and I!

Me and my love of the moon and stars at night prompted my second(?) posting on the sensational Supermoon, "Tantalizing Tuesday: Supermoon No. 5 in 2014" where I – with that beautiful photo I wish I took – wrote about the relationship to the Law of Attraction (LOA) which was another theme of mine this week in part, as well as a phenomena known as the "observer effect" which thrilled me when I first read it a few years ago.

My original "Word-less" Wednesday was transformed to "World Suicide Prevention Day & Suicide Prevention Week" as I had just discovered that they were the themes for that day and the week. I was astounded by some of the mind-blowing stats, sad to hear.

This with a photo I took which I absolutely love – the same is hanging at my workplace for now - touched ever so slightly on the three main criteria for suicide, then onto a brief story about my life on one of the factors, followed by a brief mention of two potential lifesaving supports (though one may not be apparent generally under certain circumstances).

I changed Thursday’s post title to "Self-Love: Suicide Prevention". This post was actually meant to be part 3 with Friday’s post as Part 2; however, I switched them around for some reason though can't recall now. (I'm sure I had a good reason though.) I spoke about why I wanted to die most of my life, until a certain point.

Friday’s post and title was changed as well. Instead of Part 3, I changed it to LOA: - short for Law of Attraction - Suicide, Homicide, and Me. This posting was relatively easy to write physically, but I was surprised, shocked even, that I still had emotion come up at the end after I posted it. I thought I had forgiven, dealt with the situation, and moved on with a clean slate. After all, it happened years ago!

I realized I didn’t add questions to Thursday's and Friday's Part 2 and 3 so added those before I post this one!

Again, thank you to my robust readers, faithful followers, and courageous commenters! Love you all! :) <3 (There may be better words to describe my readers and commenters, but that's what came to my mind immediately and I can't seem to think of any others. If you have better descriptors, let me know and I may consider changing it!) ;)
Posted by elly stornebrink at 11:55 PM