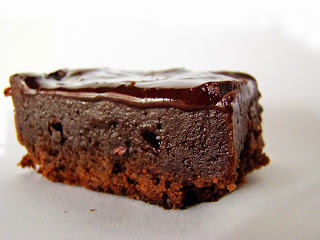 WOW! An explosion of monolithic proportions!

Those are the exact words I got intuitively as I took my first bite out of a creamy (ganache?) brownie that a work colleague made and brought in last week.

As soon as I received those words, I thought that it was a great line for a poem. I very often only get snippets, literally a line or two, sometimes even a few words that I sense is a poem or is the beginning (line) of a poem.

For example, after drafting this posting and washing my three-or-four-day pile of dishes (due to this daily blog challenge, ahem), I got these lines out of the blue: "disdain of dishes" while washing them, and "elixir of life." (And I wouldn't normally use the words "disdain" nor "elixir." By the way, check out http://en.wikipedia.org/wiki/Elixir_of_life as you may find it a rather interesting read.

And synchronistically amusing to me, a day or two later, someone used those exact words, "elixir of life." I forget the conversation, but it was like a "doo doo doo doo, doo doo doo doo..."" moment! Think of that in terms of the opening theme music from Twilight Zone by Rod Serling:

Hey, wait a minute?! Who said a poem can't be one line, I mean one verse? I've read a few poems by Rumi and Hafiz for instance that were one-liners if I understand correctly: "O wondrous creatures, by what strange miracle do you so often not smile?" Supposedly this is considered a quote by Hafiz. I say, why can't it be a poem: a one-liner poem?

There are types of poems that are only a few lines in length. And besides, I read a few blog posts recently where a story is told in only five sentences, imagine that! So why not a poem that is only one verse? I am a 'rebel' after all preferring to colour outside the lines. No, not in a rebelliously, angry, war-like, disastrous kind of way. That is not me at all, well, except for certain issues in the world that push my buttons.

Oh wait, that's another story or rather blog post! Ah, see where inspiration can come from? It can come as I think and/or type words on this page, I mean computer. 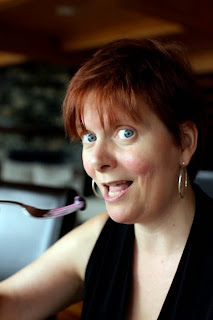 So here goes everything or nothing ... sometimes I like to challenge myself as I prefer to write poems when they come to me, not 'forced' out of me (similar to how I feel about writing by the way!)


WOW! An explosion of monolithic proportions
this orgasmic sensation on my tongue
delights my lips, my mouth, my throat, my tummy
hmmmmmmmm, yum, yum, yum

Ok, that was a short poem of whatever kind. My on-the-spot version.

Then a little later, I changed it slightly to read as follows:


WOW! An explosion of monolithic proportions
this orgasmic sensation on my tongue,
my lips, my mouth, my throat, my tummy
delights me
hmmmmmmmm, yum, yum, yum

Do you like to read and/or write poetry? What do you like to read and/or write about? Do you have a favourite poem and/or a favourite poet? If you write them, do you have a particular style? How do you get inspired or where do you get your inspiration from? I know, I know...so many questions! I'm a curious lot, what can I say. I like to learn, even from you the reader! ;)
Posted by elly stornebrink at 9:09 PM