Crepuscular Rays: Where 'God' is? 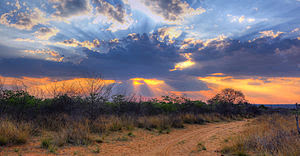 I love looking at the night sky, especially when lit with stars like bright Venus or the Big Dipper and/or Litle Dipper; those are the ones I know about and are easily recognizable. I can see them quite easily where I live. And I also love looking at cloud formations and the sky during cloudless days.

One such phenomenon that I love to witness is what is known as 'crepuscular rays' that seem to radiate downwards from the sky. When I first noticed them, I used to think, "Is that where God is?"

I was delighted to discover then that crepuscular rays are also "known as 'God rays' in atmospheric optics, are rays of sunlight that appear to radiate from the point in the sky where the sun is located. These rays, which stream through gaps in clouds (particularly stratocumulus) or between other objects, are columns of sunlit air separated by darker cloud-shadowed regions. Despite seeming to converge at a point, the rays are in fact near-parallel shafts of sunlight, and their apparent convergence is a perspective effect (similar, for example, to the way that parallel railway lines seem to converge at a point in the distance). (Bolding is mine for emphasis.)

The name comes from their frequent occurrences during crepuscular hours (those around dawn and dusk), when the contrasts between light and dark are the most obvious. Crepuscular comes from the Latin word "crepusculum", meaning twilight." (http://en.wikipedia.org/wiki/Crepuscular_rays) 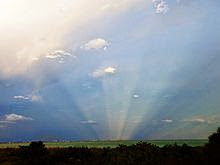 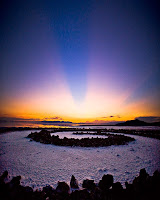 "Although anticrepuscular rays appear to converge onto a point opposite the sun, the convergence is actually an illusion. The rays are in fact (almost) parallel, and the apparent convergence is to the vanishing point at infinity." (http://en.wikipedia.org/wiki/Anticrepuscular_rays)

Forgive me for not writing much today, but I feel I need to give my hands and eyes a break, and have some fun in the sun. For some of you, it may indeed be a day of rest.

What do you love to observe about the sky? Have you noticed either of these rays before (perhaps above the clouds in an airplane)? How did they make you feel? What did you think about when you saw them?
Posted by elly stornebrink at 8:30 PM