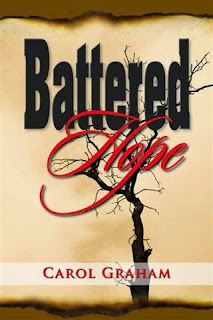 I had to go back to my old Facebook messages to see how Carol and I initially connected as I really couldn't recall. This is how ...

I had connected with Carol via her blog posts of course. It was after I nominated her for a blogging award last July that our interactions started to increase, though slowly at first. I didn't connect with her till a few months later when I asked her about voice activation in response to a comment she had made on another blogger's post.

A month later, I asked her a question about a writing challenge we were both involved in. And then due to a remark she made on one of her blog posts, I asked her if she could do a health assessment over the phone. Early December last year, I nominated her blog for another award.

It was then that we connected a bit deeper. Carol responded saying that she had already been nominated for that award several times, and twice within the past week. However, she informed me that she follows me religiously (meaning reading my blog posts). Her comment blew me away and tickled me pink 'cause if anything I have more reason to follow her blog!

Then she gave me a virtual hug saying that sometimes she feels my pain. I was curious about her remark so questioned her about it. She was referring to my emotional pain. I figured she was probably an empath which didn't surprise me at all. (I have only met one other person other than my mother who is a true blue empath, 100%! Carol is my third.)

In early January, Carol messaged me, "If you are in Vancouver - I could meet with you in person" in follow-up to to the health questionnaire which I had completed and sent to her. I was surprised yet delighted: where did she live? How close was she?

I later learned while reading her book that she used to live in North Vancouver where I live - it IS a small world! - and lived only about an hour give or take away from where she lives now.

I had hoped we could meet on my birthday which was on a Saturday in January; however, that didn't suit her schedule. She was to meet with another online blogger, Diane Bjorling, a "social media guru" according to Carol (and perhaps to herself as well) and would meet me after visiting with her.

However late the night prior, Carol discovered that she was to pick up her dogs and it had to be that weekend. So I thought, "Great, I have another weekend to clean and tidy up before she comes over."

So instead, we met the following Saturday later afternoon, not late morning as originally planned. Though excited, I was also nervous about meeting her. I can't recall why. However, as soon as I heard her voice when she called to tell me she was on her way, I felt a sense of relief. I think she laughed and it put me at ease.

Though I thought she looked a bit different from her photo online, she didn't sound anything at all like I imagined her too.

I noticed two other things about her: (1) she looked young, younger than me as I could see - I swear - NO wrinkles! and (2) she laughs a lot and I realized that it is her humour that helps to keep her going.

We were to meet for one or two hours, though I think we ended up meeting for longer, 2-1/2 to 3 hours I believe. Regardless, time just whizzed by.

I remember wanting to ask questions about her, putting the ball in her court despite knowing that she was here to see me.

Right before she left, she signed a copy of her book (which I had asked and kept reminding her to bring with her...I didn't want her to forget!) 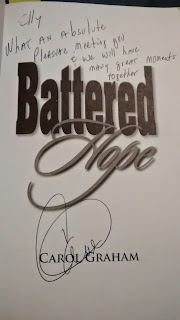 On Amazon online, the description for her book reads as follows,

"Carol is a determined resilient woman who endured traumatic events that would cause most others to roll over and quit. The challenges of cancer, rape, marital abuse, jail, loss of child and financial ruin coupled with a determination to succeed compels the reader to root for her to triumph. You will identify with Carol on many emotional terrains of love, loss, suffering, pain, heartbreak and ultimately renewal. This is her gripping story."

Carol says this about herself on her blog post, "If I Can Overcome Tragedies, So Can You." However, I think that statement requires - qualified actually - an exclamation remark at the end of it! (Hint, hint Carol!)

And by the way, we did meet this past weekend again, this time in Horseshoe Bay. (See photo on yesterday's post.)

Carol does love to share her inspirational life story and offer hope to others, and I am so glad she has with me and others. I highly recommend you read her book and her blog, the latter has some amusing stories and anecdotes as well.
Posted by elly stornebrink at 11:46 PM