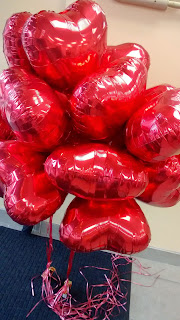 Valentine's Day is "supposed" to be a happy day ideally, an unwritten rule or norm by society's standards. However, it isn't for everyone.

I'd like to bring your awareness to an unfortunately sad subject, though I think it deserves mention in terms of bringing it out of darkness. Some, perhaps many of you are aware of this already; however, others may not or may choose to ignore it.

It's a heavy topic - a burden - one concerning girls and women, i.e., that of being (a) female...one reason of many...read to the right.

Another disturbing trend is featured at http://100milliongirls.com That is, 100 million female infants killed after birth. Why? Because 'she' was born the 'wrong sex,' the 'wrong gender.'

She wasn't born a wanted 'he' to carry the family name and/or to avoid a dowry and/or ... fill-in-the-blank. Read at least one main reason why (for this injustice) here.

What will the world come to if it is comprised mostly of men? Is that why rape is so prevalent, though no excuse, in a particular country that practices this form of brutality?

The Oprah show first drew my attention and awareness, years ago, to the horror of FGM, short for female genital mutilation, primarily practiced in Africa, the Middle East, and Asia.

And while researching, I came across this which I didn't even know existed!

Oh my! When will this end? When will violence against females, innocent girls and women end? When will we as females feel safe and at peace in our homeland and/or while travelling abroad? When can we freely roam the streets without worry, without fear?

This blog post expands a bit on the top of child brides and another on violence against women.

I cannot write anymore about this. I am in grief and instead of celebrating today's "heart" day, I will offer up prayers for females, girls and women alike.

My heart goes out to you, to us...females.

My mind is too numb to think of a 'proper' question though there may be one other than the obvious.
Posted by elly stornebrink at 7:44 PM