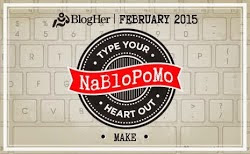 Today there is no NaBloPoMo prompt as it is a weekend though on the theme of the word "make" I would presume. It is also the last day of NaBloPoMo challenge for this month. Woohoo! I survived!!

I say that because it's not only a matter of writing and posting, but also of reading and commenting on other bloggers' posts, preferably those part of the challenge. And I am already actively involved in one blogging community, another I let go in part due to time commitments.

Having just met with blogger and author Carol Graham for the second time this past weekend after having read her book Battered Hope, I followed with another blogger's book. And I did this in between the schedule of my full-time work and the busyness of my life, primarily while travelling to and from work. And thus the fate for today's post came to be. 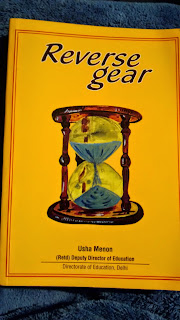 This particular blogger I met online and then indirectly in person. I will explain that below.

I just finished reading this blogger's book where I got to come to know and understand more of this remarkable woman. She is, I believe, one of the first bloggers I met online in a blogging community I am involved with (as mentioned above). I met her on what is currently known as the Blog-A-Rhythm (BAR) blog site.

This blog site is comprised primarily of Indian bloggers, I would say at least 80% though I think it may be more like 90% or even 95%.

What I immediately admired about this blogger's posts was her ability to write Japanese haiku which is a short three-lined, structured poem. I think she is a natural at it, meaning brilliant! At least I see it that way. Along with the poems, she would feature delightful or interesting photos, some taken by her.

I say that in part as I have attempted to write some haiku in past with extreme difficulty. It is due to the number of words per line along with the last line standing in sharp contrast from the first two.

Additionally, I have read quite a number of her other posts which are mainly non-fiction and primarily related to the topics of education, society, and family - hers of course - in India. These themes also comprise her book which I finished reading today.

Furthermore, she is rather adept at technology blowing me away with her knowledge and skill. I am more like a dinosaur in comparison! ;)

Usha Menon is an avid blogger and part of the BAR (Blog-A-Rhythm) community, though I initially met her by one of this blog's previous names: see photo of Usha in front of her desk with her laptop; photo courtesy of Usha herself.

And how did I meet her indirectly you may wonder? This is a two-fold question:

Most recently Usha actually phoned me long distance, not once but twice. The first time was earlier in the week. She tells me she hung up thinking it was midnight. It was actually only 10 pm my time and not late for her to call me.

I first thought it was a misdialled number - occasionally I get calls from Malaysia and elsewhere - and then I wondered if it might have been Usha; however, she had hung up after one ring possibly two.

The second time she asked if she could phone me and I knew intuitively I couldn't stop her as I knew she wanted to and would sooner or later. She explained to me that she "wanted to hear my voice."

According to Usha, I sounded just like she imagined; however, on my end I heard a voice that belied her age, sounding much younger woman than her almost 80 years! And I loved her laugh too! ;)

We even texted on our mobile phones, the latter for a few minutes at one point about a week prior to that. And before that, we would communicate via social media (Facebook). I had asked her some questions including that of her book. This is what she 'told' me: "I want people to know that I did my best for everyone i knew, whether professionally or in a family."

Isn't that sweet? Isn't she a dear? Though she terms herself 'eccentricgrandmum' on her blog, I find her so endearing that I too think of her as 'Nani' which is my affectionate term for her meaning 'maternal grandmother.' She has that quality, that sense, that feel about her...at least for me! ;)

How would I describe Usha? In no particular order: intelligent, compassionate, kind, polite, sweet, firm but loving (via her book), humorous, delightful! ...

I affectionally nickname her 'grandma' (short for 'grandmother') after she nominated me for a blogging award. And I later read an online communication between us where she informs me that she has "a motherly affection for me." ;) 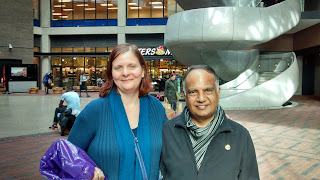 Only two weeks ago, I met Usha's son Deepak and also met Rajeev upon her son's visit to Canada. (*According to Deepti, Rajeev's wife, she herself is Usha's grandniece so that makes Rajeev, Usha's .... [fill in the blank as I'm not great at figuring out the family tree!].

Usha had messaged me stating she had "a small gift" for me as a token of her friendship which Deepak had bestowed upon me. (I normally don't speak so formally but that is the word that came to me!)

Upon meeting these two men downstairs in the atrium near my workplace, I was greeted with a relatively large and soft package. I immediately thought "Punjabi suit?! How does she know what size I am?" ;)

After heading back to my office upstairs, I opened the package in shock and surprise to discover not one, not two, not three, but four gifts! That's "small?!" [An aside here to Usha: I knew you had a sense of humour! ;)]

Elly with warm beige shawl over beige warm down coat

The gifts are (1) a beautiful hand-embroidered beige shawl which is almost the same colour - matches - my long beige down coat (2) a necklace made of tiny shells (3) multi-coloured glass earrings and (4) her book that she had written entitled, Reverse gear. (For some reason, I keep thinking it's called Shifting Gears which would have been just as appropriate!) 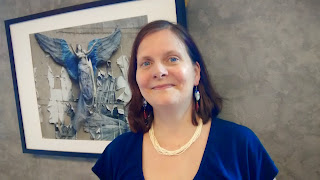 Elly wearing earrings and necklace (with a pic I took)

I felt extremely humbled and touched by Usha's sweet and kind gesture.

Read more about Usha Menon on and in between the lines of her blog entitled, "Kuch Khatta Kuch Meetha." According to Usha it means as follows: "Khatta means 'sour' and Meetha means 'sweet.' Kuch means a little. And the title means some sour and some sweet."