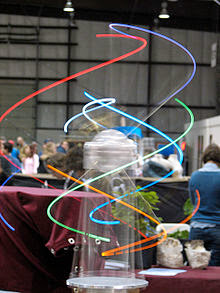 Today's NaBloPoMo prompt: "Have you ever been to a Maker Faire? What was the most impressive project you saw?"

According to the internet, "Maker Faire is the Greatest Show (and Tell) on Earth - a family-friendly festival of invention, creativity and resourcefulness, and a celebration of the Maker movement."

I have never been to one yet alone heard of Maker Faire before, have you? It sounds intriguing though, considering I am curious by nature. Most likely because, well, I swear I haven't graduated from age two yet! The question "Why?" is still one of my favourites! ;)

If anything, I would hope that the faire would hold some of the inventions I create, at least in my mind, over the years! Unfortunately, I do not know any inventors and suppose I would have to attend an inventors organization or perhaps this faire and rub shoulders with some or...is that how it works?

There is a mini-maker faire held in Vancouver in late spring of this year - fourth annual - so I may check that out. And apparently it's a worldwide event.

How about you: Would you consider attending such a faire? Why or why not?
Posted by elly stornebrink at 10:20 PM