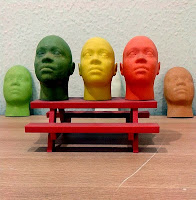 Today's NaBloPoMo prompt is this: "Have you ever used a 3D printer or had something 3D printed? If you could use a 3D printer today, what would you make?"

There have been quite a number of synchronicities in my life and this is certainly one of them. Just yesterday, Monday, during Family Day holiday in British Columbia, I went to the library and noticed this piece of news on the front page of Sunday's local newspaper.

It featured a large coloured photo about 3D technology. This followed with a few inside pages of examples: a 3D mask and figurine somewhat analagous to a selfie I suppose, also prosthetics (which is what came to my mind initially regarding the question when I first read it last week) as well as orthotics and even human tissue! Wow! How exciting!

I had read or heard of this technology some time ago, a few weeks or perhaps even a few months ago via a previous news article or maybe even an inspirational TED talk. Regardless, aren't scientific breakthroughs utterly amazing?! Though I thought this technology was quite new, it has actually been around since 1984! How come I am only coming upon this rather recently?

Possibilities of 3D printing around the human body that I imagined - animal bodies too - reproducing organs and body parts such as skin tissue, eyes, ears, heart, lungs, teeth, etc. And what about those who are disabled, some who require prosthetics or the like?

I love out-of-the-box thinking and being inspired with creative efforts such as this: the possibilities are endless, limitless, out of this world!

How excited are you about this relatively new technology? And what would you 3D print if you had such a machine?

Pictures from Wikipedia. I attempted to download two videos without success.
Posted by elly stornebrink at 9:54 PM