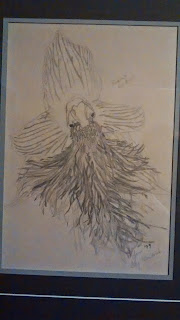 Today's NaBloPoMo prompt is, "Do you tend to buy or make the decorative touches in your home?"

If you read my post a few days ago on crafts, i.e., paper trees, you will see that I rarely make my own. Frankly, I do not have the time, the energy, or the patience to make them, at least for the most part, though these trees were an exception!

Rather, I consider myself more of an artistic person, at least in terms of drawing. I didn't realize I had a talent for it until I came across some beautiful photos of orchids in a National Geographic magazine.

There were a number of them that I drew, one in particular for quite some time. In fact, one of my drawn pictures I later had framed, as I spent hours replicating the photo as best I could and felt it deserved some merit.

What fascinated me about these orchids were that some of them looked like they had human or non-human faces. Unfortunately, though I later purchased the magazine years later, it is currently in one of my storage boxes. Otherwise, I would feature the original and my version here. Never thought I'd be writing about it one day!

However, you can see the picture above of the detailed 'Bearded Hillbilly' as this particular flower was called. Rather appropriate a name, don't you think? ;)

"Desiderata" (meaning "desired things" in Latin) is a prose poem that hangs on a wall in my kitchen of all places. However, I didn't want it in my living room though I think it may be more suitable there or perhaps even in my bedroom. Read the piece and its history here.

Another favourite piece of decor as silly as this may sound is an attractive calendar - pardon the flash - this year's hanging perfectly on a narrow wall between my bathroom and the living room. My current one is called 'Treehuggers' which caught my attention immediately as (1) I love trees (2) I hug trees from time to time and (3) a social media name that I use has 'treehugger' as partof it. Thus, I thought it amusing that I discovered this "leftover" calendar on sale at Banyen Book's annual Groundhog Day (that lasts a weekend).

Over the years, I've had pieces of purchased artwork come and go like this one; it didn't seem to fit or suit anywhere in particular in my current home. I love gerberas, one of my favourite flowers (especially orange and yellow). And I love to dance and sing - the words are "dance" "sing" "love" "live" - so bought the picture and had it framed. Interestingly, the glass on this frame broke twice, once when I moved. I'm considering reframing it in plastic or perhaps just removing the frame and laminating it instead. That way it won't break!

I have a built-in shelf which I adore that lines one wall and part of another in my living room (and bedroom as well). On the longest side in my living room, I have a number of books displayed in various arrangements. 'The Ringing Cedars of Russia series' written by Vladimir Megre has such gorgeous book covers, that I think are meant to be displayed. This is why these books stand the way they do. 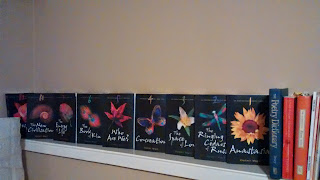 Though I used to have an altar, created spontaneously with various heart-shaped objects, some small crystals, cards, and the like, my place is too small to have one. Instead, I have a Burmese temple guardian made of limestone outside my door. It feels like the right spot for it as my place is too small and it doesn't feel like it belongs inside.

This 'artifact' (as I suspect it's machine made though who knows) is a story in itself. For another blog post perhaps? This one is getting too long, actually longer than I expected. I didn't know I had that much to say about this topic. ;)

What types of decor do you prefer and/or are most attracted to?
Posted by elly stornebrink at 8:33 PM