Quote Challenge Day 2: Quotes are mine! 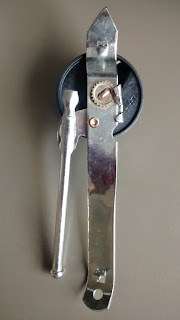 Can opener (photo by me)

I have a number of phrases that I often say. I consider them quotes, my (own) quotes! Thus, I will feature different ones for three days as part of this challenge.

I occasionally come up with creative ideas and/or designs which have included office furniture, a cellphone, and the like! Unfortunately though, I know no inventors!

And though I have never studied mechanical engineering, I can see - read yesterday's blog post on uncommon sense as it relates to today's quote - how things are sometimes poorly designed.

I primarily find designs of homes, bathrooms, and home and workplace kitchens, as well as clothing (women's fashions), the worst culprits in terms of practical functioning. Sometimes gadgets fit the bill too, such as old style can openers.

The can opener above made of metal, rusts easily, especially when washed which is often the case. Also, some are primarily for right-handed people. The one shown has solved that dilemma by being able to open the top of a can rather than the side of it.

Photo (right) by me of workplace kitchen: not much space for appliances etc.

One pet peeve I used to have were cleaning bathroom tiles both above the bathtub and the floor! I had such a disdain for them years ago as I spent hours attempting to clean them.

Bathtub tiles get water stained and dirty between the tiles - floor tiles too - and they are not always easy to clean, particularly if not done so on a regular basis.

In contrast is acrylic material (I believe) that is 100% smooth. It is so easy and effortless to wipe down, making cleaning it such a pleasure (as weird as that may sound). I mean it's such a whiz to clean that it's almost fun!

I have an idea or two of poor designs though will have to take a photo tomorrow and show it sometime then, so stay tuned!

Do you notice poor design/functioning as well or is it just me? And if so, in what capacity?

I have been nominated for this challenge by Parul Kashyap Thakur, Shilpa Garg, and Usha Menon.

This is what the 3-Day Quote Challenge is all about.

1. Post one of your favorite quotes (different quote on each day) on three consecutive days. The quote can be from your favorite book, author, or your own.
2. Nominate 3 bloggers to challenge them.
3. Thank the blogger who nominated you.

Since the BAR (Blog-A-Rhythm) community that I am involved with have already been nominated already from what I understand, I will skip the nominations. However, if anyone is interested, feel free to pick up the challenge in case you haven’t already received it.
Posted by elly stornebrink at 12:00 AM