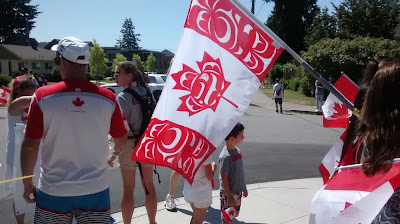 A flag with a First Nations motif (photo I took)

And here is the traditional version of the Canadian flag (in the middle) between the Vancouver flag to the left and the BC (British Columbian) flag to the right of it (below): 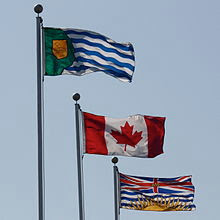 Flags of Vancouver, Canada, and BC (Wikipedia photo)

I'm grateful to be living in a free land/country without war, without having to worry about living in a refugee camp, starving and destitute on the streets (though there are people here who are) and the like.

Waving my paper Canadian flag, wearing my Canadian flag pin and red and white coloured clothing, I attended a Canada Day parade in North Vancouver, British Columbia before heading back home, grabbing a bit to eat and what-not before heading for a Canada Day festival of music, food carts, vendors, and the like. Later on, watching the fireworks to music which I prefer, i.e., without music it seems rather dull and boring in comparison. 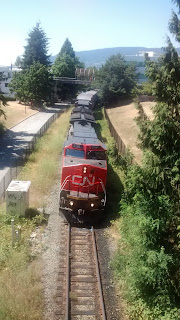 Photo of CN train I took

What do you appreciate most about being Canadian if you are one?
Posted by elly stornebrink at 12:05 AM