Quote Challenge Day 1: Quotes are mine! 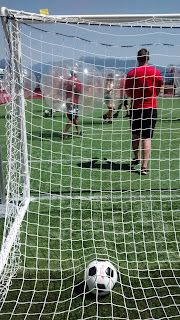 Bubble soccer players (photo by me)

I have a number of phrases that I often say. I consider them quotes, my (own) quotes! Thus, I will feature different ones for three days as part of this challenge.

Did you ever notice that? Or am I the only one? I'm sure I'm not, right?

Being a keen observer, I see so many things that, well, defy logic! I can think of so many things, including designs and fabrics of women's clothing, such as socks and the like, and especially when it's so hot outside! (I would love a bra made out of bamboo for example!)

At times, I imagine designs and layouts in terms of furniture, kitchens, rooms, and even house layouts. Why for example is the handle on the other side of the fridge? It's totally inconvenient and impractical on that side! (This is dependent upon where the fridge is situated, of course!)

And these examples are only the tip of the iceberg! ;)

On Canada Day, I saw a number of people - the general public (both men and women) - play bubble soccer. Why are they wearing such dark colours, especially on such a stinking, hot day? And why play bubble soccer mid-day in the blazing hot sun in the first place?!

Soccer is a hot sport already with all the running around; however, add plastic bubbles and arm/knee pads for example, and you're probably sweltering inside even before the game starts! ;)

I have been nominated for this challenge by Parul Kashyap Thakur, Shilpa Garg, and Usha Menon. Thank you all.

This is what the 3-Day Quote Challenge is all about.

1. Post one of your favorite quotes (different quote on each day) on three consecutive days. The quote can be from your favorite book, author, or your own.
2. Nominate 3 bloggers to challenge them.
3. Thank the blogger who nominated you.

Since the BAR (Blog-A-Rhythm) community that I am involved with have already been nominated already from what I understand, I will skip the nominations. However, if anyone is interested, feel free to pick up the challenge in case you haven’t already received it.
Posted by elly stornebrink at 12:01 AM