Creativity: To Be or Not to Be 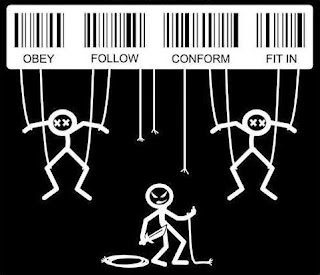 Today's post is inspired by two quotes on creativity, a prompt from #writetribe - picture from google

Creativity is not borne out of being and thinking like everyone else. Besides, that would be a very boring world we would live in, would it not?

Can you imagine: a world where we all looked the same, sounded the same, thought the same, felt the same...? Rather mundane, boring, lifeless, and the like it would be, would it not?

If we did, we would be like automatons (robots) going through the motions or like sheep - think ‘herd mentality' – would we not? Or how about a number like a prisoner or factory machine worker?

By the way, my reference to "A Dream, A Vision in my Heart" (my previous post) about the inspiration of 'my' alternative children's choir began originally with the thoughts I mentioned above...more about that another time perhaps?

Gerald G. Jampolsky states, "A truly creative person rids him or herself of all self-imposed limitations." Isn't that the truth?

One needs to step out of the box, draw out of the lines, go outside boundaries and limitations in order to be creative. This brings to mind a popular quote by Einstein, "We cannot solve our problems with the same level of thinking that created them."

Sometimes it requires courage, perhaps more often than not to express our creativity, to go beyond the norm, sometimes against what is socially acceptable or deemed 'normal' or 'appropriate' at the time. I'm not speaking of unethical behaviour here. Let me give you an example:

Christopher Columbus didn't wait for the common man to agree that the world was round before he decided to sail it. Creativity isn't only artistic, through painting and other forms of creative expression, ...

...it can be in our way of thinking and seeing the world as Columbus did.

Columbus is a great example of the following quote by Bertrand Russell, "Do not fear to be eccentric in opinion, for every opinion now accepted was once eccentric." The public did generally come to accept that the world was indeed round, not flat as originally agreed to. The worldview changed as a result of his thinking!

Do you think a person's natural essence is creativity, i.e., is born creative or do they develop creativity? I'd be curious to 'hear' your thoughts.
Posted by elly stornebrink at 11:12 PM