A Day of Thanks 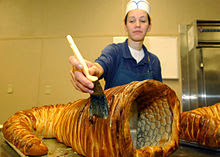 An empty cornucopia made of bread, prepared for a Thanksgiving meal, picture from Wikipedia (may be filled with harvest vegetables and fruit)

There are different histories and celebrations marking this day between Canada and the United States: see http://en.wikipedia.org/wiki/Thanksgiving for more information.

Thanksgiving, A day of giving thanks, signifies a day of gratitude of the current harvest as well as from the previous year. It is a time to give thanks for the blessings, the abundance, the cornucopia, bestowed in our lives. See yesterday's post, A List of Thanks: http://xpressyouressence.blogspot.ca/2014/10/a-list-of-thanks.html

What is an expected meal at Thanksgiving you ask? A traditional Thanksgiving meal consists of this cornucopia of food: turkey filled with stuffing, mashed potatoes with gravy, yams (also known as sweet potatoes), corn and other harvest vegetables such as squash; dessert is mentioned below.

Turkey, being the centre of attention of the Thanksgiving meals plays a major role in its preparation. It may be glazed with its own juices later used for the making of gravy, or laced with bacon strips on top (the way my mother used to), it may have no stuffing or lots of stuffing inside, though usually the latter. And both turkey and stuffing comes in umpteen recipes.

Are you celebrating or have you ever celebrated Thanksgiving?

Posted by elly stornebrink at 4:04 PM