Aftermath of an Almost Glorious Victory 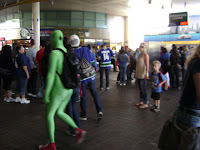 Are we so disconnected as a society that we feel that the best way to connect with others is through hockey? For example, dressing up in the city's hockey jerseys or even all in green, one of the team's colours? Or feeling the need to bond over beer and a sport as violent as hockey?

Do we as a city not have more soul and depth? Or are we artificial beings relating on a superficial level?

Some people may hate me for asking those questions, as well as when I say that I have never liked hockey and find it a violent sport, not to mention boring as a male in my choir attested to. It seems to have become more violent over the years and even off the ice as, unfortunately, we witnessed last night.

And at times like that I hate hockey. Yes, you heard me right. Not only because of the riot but because the city caters to hockey fans so much so that I hear rambunctious stereo sound when I travel the streets or when, last night, I sat with a friend outside trying to enjoy some dinner. I didn’t want any part of it. I wasn’t interested!

Now, don’t get me wrong. I’m not a total ..... (fill-in-the-blank here with your choice word). I would have loved for the Canucks to win the Stanley Cup. We were so close.

However, would it have made any difference if we won? The riot may have occurred anyway. Just an excuse for some people to cause mayhem damaging private property and hurting people in the process. I don’t really care to share the details here. If you want them, check out the newspapers or online. (However, remember this if you do, what you focus on expands.)

Did we learn anything from the riot in ’94? It seems not. It’s no wonder that Vancouver was declared a ‘no fun’ city for quite some time, i.e., years afterwards. Things were starting to happen again to bring Vancouver on the map again, but maybe we’ll go back to square one in this case.

My hope and prayer for Vancouver at this time is that we find peace. One way is through healthy and safe expression of emotions. Another is to find acceptance. Accept things just as they are. If we were to accept our hockey team’s loss with dignity as the team did, none of this violent aftermath would have occurred.

What does the condition of Vancouver, let alone the world say about our inner world? Because what we see and experience is a reflection of us, both as individuals and as a community or society.
Posted by elly stornebrink at 8:40 PM