Part 3: To Give and Receive ... Forgiveness

In my previous blog posting I mentioned “And in giving, so you (shall) receive [pause] …love.” Yes, ‘love’ was the word that followed that phrase as in ‘receiving love.’ The word that immediately came to me after that (i.e., ‘love’) was 'forgiveness' as in “The greatest power is the power of forgiveness.”[Photo: AFP, http://www.rfi.fr/actuen/articles/122/article_6826.asp]

In forgiveness, you also give. You give absolution - that word just came out of the blue now as I am typing this – and it means (I had to look it up), "formal release from guilt, obligation, or punishment" (as per google search).

To me this indicates releasing someone from prison, one that you psychologically impose, and even more so releasing oneself from prison! (It's actually perhaps more like freeing yourself from being in shackles.) The laws of giving and receiving, and that of karma applies here just the same (see previous post, Dec. 8, 2013). 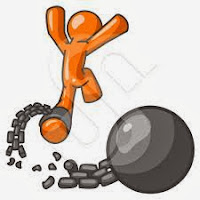 
Who do you need to forgive? Your spouse, partner, child, neighbour, enemy, friend, yourself? Can you do so? Now? Soon? Before the end of this year (and start the new year fresh)?

Posted by elly stornebrink at 8:44 PM