How silly of me! I had forgotten that there were two other main reasons for agreeing to sing The Mummer’s Dance by Loreena McKennit on Mother’s Day. Was it just two weekends ago?! (This month is sure flying by!)

As a result of a warm-up during the byoV choir rehearsal where members were sounding notes, i.e., toning and humming, I ended up standing relatively near Alexis. A male choir member commented on the lovely harmony we created which I had also noted – pardon the pun (as they just come out of me spontaneously). Thus, I thought we might sound good together creating a nice harmony - had this in mind - when Alexis asked if anyone from the alto section was interested in singing the chorus of a song as backup.

The other reason I had agreed to singing a duet with her was simply that I love that song, rather the music in the song, at least initially. What I mean is that I actually was not even aware of the words to this song beforehand. It wasn’t until Alexis sent me the link to the video that I could learn the words as I read and heard them. Consequently, I love the song even more and in fact, I consider this my favourite of Loreena’s songs.

This is due to the fact that I love nature, especially springtime and trees. 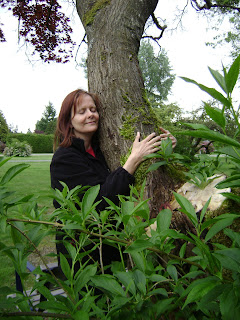 Could I be a 'tree worshipper'? – I love to touch, hug, and ‘bless’ trees (occasionally) as I walk by.

I also love to gaze at the moon and stars and do that as often as I can – I have witnesses! – and love to hear birds singing. And furthermore, I love to dance, though I haven’t around trees, at least not yet! ;)

In her own words, Loreena refers to a book that suggests that “mumming has its roots in the tree-worshipping* of the peoples who inhabited great regions of a forested Europe now long gone.” There’s that word* again! (Hmmm…wonder if they were perhaps Celtic and Pagan?) (http://www.quinlanroad.com/explorethemusic/bookofsecrets.asp?type=notes&id=534)

“Mumming usually involves a group of performers dressing up in masks (sometimes of straw) and clothes bedecked with ribbons or rags, and setting out on a procession to neighbouring homes singing songs and carrying branches of greenery. It’s primarily associated with springtime and fertility, and it has a cast of stock characters, like the Fool, which recurs in some form or another from Morris dancing to the shadow puppet plays of Turkey and Greece and even the morality plays of the Middle Ages.”

“Black Sheep Morris and Mummers” aka “Bowen Island Black Sheep Mummers” (http://www.bowenblacksheep.ca/) are not the only mummers in BC. This troupe dress primarily in black rags with colourful ribbons. They’re quite an interesting lot of musicians/dancers in both their look and sound.

I couldn’t quite make out what they were when I saw them for the first time about a year or so ago. I would have if I had understood the meaning of Loreena’s song beforehand!

What aspects of nature do you love and how do you express it?
Posted by elly stornebrink at 9:45 PM