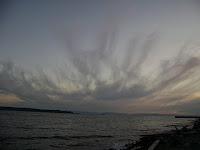 In the book The Valkyries, Paulo's wife, Chris, was instructed to look at the horizon by her husband's guide: “...the things that surround you change you - in the same way that you change them.” (p. 28) Paulo later briefed her on this: “...A magus, though, always looks much further. We expand that ‘magical space’ and try to control a great many more things. They call it ‘looking at the horizon.’’” (p. 33)

Then Chris goes on to say, “Before, I looked in the distance, and things in the distance seemed really far, you know? They seemed not to be a part of my world. Because I was used to looking only at things that were close, the things around me. But, two days ago, I got used to looking into the distance. And I saw that besides tables, chairs, and objects, my world also included the mountains, clouds, the sky. And my soul – my soul seems to have eyes that it uses to touch those things.” (p. 38)

Paulo was very impressed with her poetic expression and then she repeated, “My soul seems to have grown.” (p. 38) to which he responded in part, “...we’re always looking at the things that are closest to us. Looking down and inward. So our power diminishes, and using your term, our soul shrinks. Because our soul includes nothing but ourselves. It doesn’t include oceans, mountains, other people; it doesn’t even include the walls of the houses where we live.” (p. 38)

I love the way both Chris and Paulo expressed this. And how true! When I am self-absorbed I stay in my own little world, but when I focus outside myself, my world expands, automatically.

In reference to his wife’s comments, “Paulo liked the expression, 'My soul has grown.'" "...he would have heard much more complicated explanations, such as 'My consciousness expanded.' But the term his wife had used was more exact.” (p. 38)

Have you ever felt like your soul expanded? If so, when?

For example, my soul expanded when I had a spiritual awakening. I’ll write about that one day, maybe on the 20th anniversary (December 30, 2012)! Can you wait that long? Can I? Do we need to have our soul expand in order to be patient? ; )
Posted by elly stornebrink at 11:09 PM